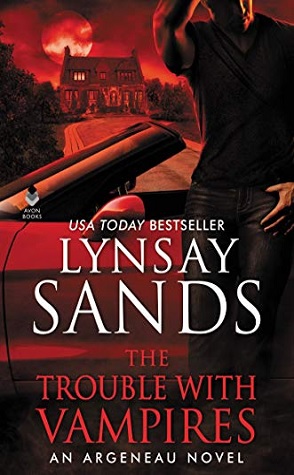 For close to three thousand years the imposing, impossibly handsome Santo Notte has fought in armies across the world and battled his own, more personal enemies. Of all the places he might expect to encounter his life mate, a quiet corner of upstate New York doesn’t seem likely. But as soon as he makes contact with history professor Petronella Stone, while hunting down a suspected rogue immortal, he knows that she will be the greatest adventure of his eternal life.

He expects her to be surprised, confused, even overwhelmed. What he doesn’t expect is that Pet has a secret history of her own. There’s no mistaking the mind-blowing, mutual pleasure they share. But as Pet struggles to protect her nephew from a danger lurking too close to home, Santo realizes there’s another threat to her safety—him. And claiming their passionate future will be impossible until he leaves his past behind, forever…

Petronella is babysitting her nephew when someone tries to break into her sister’s house.  She is saved by the guests staying at the house next door, but she recognizes them as immortals and doesn’t trust them at all.  What she really doesn’t expect is that the immortal named Santo would really be someone she fell in love with.

The immortals are at the house next door because they have followed a rogue vampire to a house on that street. When Santo can’t “read” Pet he’s shocked that he’s finally found his life-mate.  He’s even more shocked when he finds out that she knows about immortals.  Unfortunately the only experience she’s had with immortals is bad.  It takes some time to convince Pet that not all immortals are evil like the ones she experienced and that he can protect her and his nephew from the rogue.  What he can’t do is woo her properly because he has no experience.  He may fumble his way through but Santo finally wins the girl.

This was a cute story in the Argeneau series.  I liked the fact that Pet knew about immortals – even though she didn’t have all the facts.  Some things needed to be explained to her but for the most part she was in the know.  This was something different in the series and I liked that.  Santo and Pet were cute together.  I liked how protective they both were of her young nephew.

What I didn’t care for in this book, and what shocked me, was how dark a part of it was.  I’ve never read a Sands book that has dark undertones, and I truly don’t want to again.  It not only described the horrible way in which Pet’s sister & mother died, which was absolutely horrible, but then it went onto Santo and how his entire family was murdered.  OMG, both stories were horrific, but getting both in one book? No, thank you.  I read Sands because I know I’m going to get light romance – that was not this book and I didn’t care for it.

Except for those two parts of the book the rest was pretty light and I liked it.