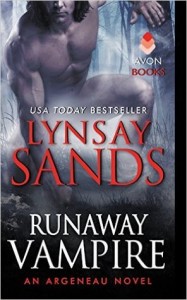 Dante Notte has heard it said that love hurts. He just wasn’t expecting it to run him over in an RV. Still, a punctured lung and broken ribs are nothing compared to the full-body shock he feels whenever he’s near the vehicle’s driver, Mary Winslow. He needs to keep her safe from their pursuers while he rescues his brother. Most challenging of all, he needs to claim this smart, stubborn woman as his life mate.

The naked, injured, insanely gorgeous younger man who clambered into her RV insists they belong together. If Mary wasn’t feeling their incredible connection in every inch of her being, she wouldn’t believe it. But now that the men who took Dante’s twin are after her too, trusting her gut means risking her life for an immortal who’s the very definition of a perfect stranger.

Dante is running away from the men who had kidnapped him and his twin, Tomasso, when he runs smack dab into Mary’s RV.  He manages to pull himself into the RV and hide in the back but eventually Mary finds him when she stops to get gas.  She runs for help but soon everyone is leaving the RV saying that Dante’s injuries weren’t that bad.  She’s confused but then the naked man who she thought was at death’s door is up and around.  What?  He of course was mind-controlling them but he soon finds that he can’t read Mary which is a sign that she could be his life mate.  He soon finds out that she definitely is his life mate and he’s not about to leave her on her own since the kidnappers can identify her RV and might come after her.

Dante knows he needs help to find his twin but he’s not about to let Mary be on her own.  Trying to get her to believe that he’s an Immortal and that she is his life mate isn’t easy as Mary is justifiably in the non-believer category.  Dante finally convinces her but at the same time they’re running for their lives and the dangers they face will change Mary’s life forever.

Dante Notte is one of those characters that’s been in several different books along with his twin as secondary characters.  I’ve been anxious to get their life mate stories for a while and was SO happy when I saw that this was Dante’s book.  He’s definitely the strong silent type but he was open and loving with Mary and it was wonderful to see another side of his character.

Mary was a funny woman.  Some of her thoughts when she first met Dante had me laughing out loud (he was naked and trying to cover himself with a loose weave afghan).  I kept imagining her as someone who looked like Blythe Danner who is in her 60’s and still looks great.  Of course we all know (if you’ve read any of the books) that she gets turned into an immortal and this was of course, in my mind, Gwyneth Paltrow.  Don’t judge – it worked in my head! Lol.  Anyway she was a fantastic match for Dante and his quiet ways and I loved them together.

This was another good story in the Argeneau series.  I keep thinking that I’m going to get sick of the series eventually but Lynsay Sands keeps me coming back for more every time.  🙂  I can’t wait to read Tomasso’s story and find out what happens when he meets his life mate.

A Quick Bite
Love Bites
Single White Vampire
Tall, Dark & Hungry
A Bite to Remember
Bite Me If You Can
The Accidental Vampire
Vampires are Forever
Vampire, Interrupted
The Rogue Hunter
The Immortal Hunter
The Renegade Hunter
Bitten by Cupid
Born to Bite
Hungry for You
The Reluctant Vampire
The Bite Before Christmas
Under a Vampire Moon
The Lady is a Vamp
Immortal Ever After
One Lucky Vampire
Vampire Most Wanted
The Immortal Who Loved Me
About a Vampire
Runaway Vampire