The year is 1889, and Rachel Hollister hasn't set foot outside her house in five years. Ever since a savage attack left her family dead, she's cordoned herself off from the outside world, afraid to let anyone into her home—or into her heart. But now trouble has appeared on her doorstep—and suddenly she has no choice but to let a handsome rancher invade her well-guarded existence ...

Confirmed bachelor Joseph Paxton grudgingly offers to take up temporary residence at the Hollister ranch—even though it's obvious Rachel doesn't want his protection. But once he catches a glimpse of his beautiful young ward and her remarkable spirit, he'll do anything to break through the dark spell that's walled off her heart. It may take a miracle, but he's determined to make her see the refuge he's offering in his embrace—and the splendor that exists beyond her front door. Otherwise he'll just have to build a safe haven big enough for the both of them ...

While looking through old posts I came across this one for Summer Breeze by Catherine Anderson. I remember the warm, sweet feeling I was left with after I finished this book. I’m not sure it would work as well for me if I read it now, but it will always hold a special place in my heart.

This review was originally published August 7, 2006

What an amazing love story.

We all fear something. Whether we have a true phobia – such as my fear of ‘S’ words (don’t ask) – or just something that makes us break out in goosebumps, we all know what it’s like to be afraid of something.

Rachel Hollister’s fear is that of being in an open space. Her family was brutally murdered right in front of her while they were out for a picnic. As a result, she hasn’t stepped outside her home in five years.

Her faithful friend, the elderly Darby, has done everything in his power to make her a sanctuary inside her home. He barricaded all the windows and doors and converted her kitchen into as comfortable a place as possible for her.

Though Rachel knows her fears are irrational, they’re there all the same, and she can’t overcome them. She refuses to leave her small kitchen for any reason, and can’t even open a door or window to allow sunlight in. For five long years she lived in absolute silence, with no natural light.

To keep herself occupied, she read books and crocheted. She spoke with Darby through the door of her home and that was the only company she had.

Until Darby is shot in the back and manages to ride to the neighboring Paxton ranch in search of help. Joseph Paxton finds him and promises to look after Rachel. Darby is convinced his being shot has something to do with the murder of Rachel’s family and fears for her safety.

As Joseph breaks into Rachel’s home, he expects to find a crazy young woman, and instead encounters a lovely creature he’s immediately taken with. He comes to realize that Rachel isn’t crazy at all, only frightened.

Watching this story unfold has been a wonderful experience for me. Seeing Joseph do everything in his power to make Rachel’s world one filled with sunlight and birdsong really touched me.

Since Rachel’s fear is based on open spaces, Joseph hits upon the idea of installing metal doors with bars on them so she can enjoy the sunlight and still feel enclosed. Then one of the town’s populace hits upon the idea of building her a stone-walled courtyard with an iron-work ceiling so it’s completely enclosed, therefore allowing Rachel to be outside. They called it:

Watching Rachel emerge from her self-imposed prison and into the sunshine for the first time in five years made my heart swell and my eyes sting with tears. Joseph’s reaction to Rachel in the sunshine touched me more deeply than any other tender moment in a romance novel. I could feel their emotions as she turned her face to the sun for the first time in so many years.

She was halfway across the courtyard before it struck her that she was outside. Oh, God, outside. She staggered to a stop, frozen in her tracks. Her heart pounded violently. But nothing else happened. She could still breathe. She just felt a little dizzy and disoriented. “Joseph?”
“You’re fine, sweetheart. You’ve got walls all around you. Look at them. Name me anything that can go through that rock.”
She let her head fall back to put her face up to the sun. The gentle warmth on her skin was beyond wonderful. She held her arms wide and turned again, filling her lungs with fresh, cool morning air.

Joseph asks Rachel to marry him and the following scene is so touching. Rachel refuses him, saying she can’t have a family living the way she does.

“What would I do? Push them out the wood safe to see them off to school?” She gestured with her free hand the encompass the kitchen. “A family can’t live in one room.”
“I’ll make it work,” he whispered. “I swear to you, darlin’. I can make it work. No hallways to frighten you, just a big room like this with water closets all around, only they’ll be bedrooms, with you in the big room, living as you do now, never needing to go outside unless it’s to sit in your courtyard or work in your flower beds.”

The murder of her family was left unsolved all those years ago, and Joseph and his lawman brother David set out to find the missing pieces of the puzzle, hoping to keep Rachel safe and finally give her closure.

The story was sweet and amazing and one of the most touching I’ve read in a long time. It’s not very often that you read a murder-mystery that’s sweet and compelling as well.

I’ll leave you with my favorite quote from the book. Something Joseph said to Rachel that touched my heart.

When I first met you, I thought I was opening up the world for you, but I was so wrong. You were the one who opened up all of my windows so I could see the beauty beyond the glass. 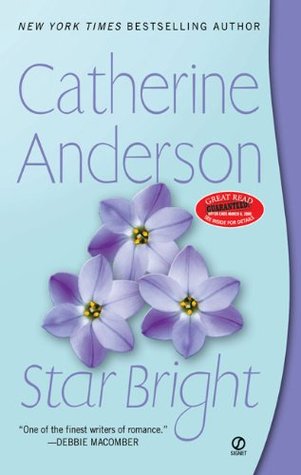