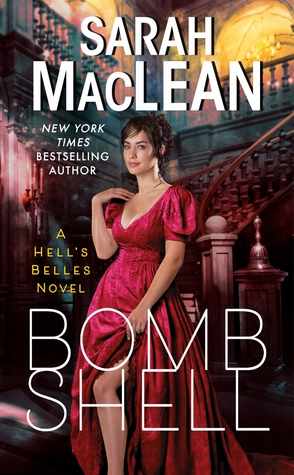 After years of living as London’s brightest scandal, Lady Sesily Talbot has embraced the reputation and the freedom that comes with the title. No one looks twice when she lures a gentleman into the dark gardens beyond a Mayfair ballroom…and no one realizes those trysts are not what they seem.

No one, that is, but Caleb Calhoun, who has spent years trying not to notice his best friend’s beautiful, brash, brilliant sister. If you ask him, he’s been a saint about it, considering the way she looks at him…and the way she talks to him…and the way she’d felt in his arms during their one ill-advised kiss.

Except someone has to keep Sesily from tumbling into trouble during her dangerous late-night escapades, and maybe close proximity is exactly what Caleb needs to get this infuriating, outrageous woman out of his system. But now Caleb is the one in trouble, because he’s fast realizing that Sesily isn’t for forgetting…she’s forever. And forever isn’t something he can risk.

Bombshell is the first book in a spinoff of Maclean’s Scandal & Scoundrel series. I purchased the ebook, then requested the audiobook from the library since I have a long commute every day. I really like the narrator, Mary Jane Wells. I did struggle with the first couple chapters of the audiobook because there are a lot of characters and names that are introduced or discussed. Since I didn’t read the original series, I wasn’t familiar with any of them and it was confusing trying to keep everyone straight. After the first few chapters I easily fell into the story. I ended up switching between the ebook and the audiobook.

As much as this is the start of a new series, I do feel like I was missing some key information by not reading the previous Talbot sisters’ books. I may go back and read the series just to catch up.

I really enjoyed Sesily. She’s woman comfortable with herself and not afraid to go after what she wants. I loved her friendship with the other Hell’s Belles, and how they worked behind the scenes to fight injustices. I also liked that she didn’t take responsibility for the actions of anyone else.

I also enjoyed Caleb. He was able to hold his own against Sesily, which was good considering what a strong personality she had. I did become frustrated with the way his “big secret” was hinted at over and over again, but not revealed. That’s a personal preference. I don’t like when the reader is kept in the dark, especially since I had already guessed most of it. The romance was sweet, but honestly it was Sesily and the Belles who stole the show.