Today we’re spotlighting Rules of Contact by Jaci Burton, book 12 in the Play by Play series. Don’t let this discourage you from reading it, however, as it stands alone nicely. I read it, and I’m about 7 books behind in the series. 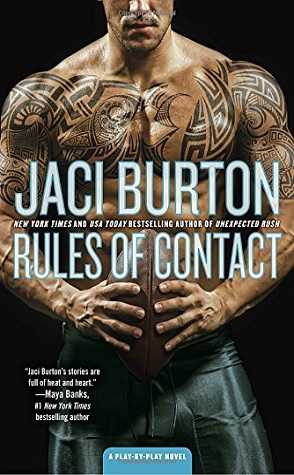 In the new Play-By-Play novel by the New York Times bestselling author of Unexpected Rush, a football player who knows how to win on the field needs a better game plan for his love life.

A defensive end for the San Francisco Sabers, Flynn Cassidy is used to being in the spotlight—he just doesn’t enjoy it. But if getting in front of the cameras will help his new restaurant succeed, he’s willing. Now if he could just meet a woman who loved him and not his fame…

After her divorce, Amelia Lawrence is thrilled to start over as head chef at Ninety-Two. It’s just the opportunity she needs to heat up her career—if only she wasn’t wildly attracted to her sexy new boss. Their chemistry might be sizzling hot, but Amelia has no intention of being burned again.

Flynn can’t get enough of Amelia, and Amelia loves every second she spends with the tough yet tender Flynn. But trust is a hard-fought battle for both. Breaking the rules of contact and surrendering to their passion was the easy part. Are they willing to risk their hearts to win at the game of love?

She let her fingers map a trail over his shoulders and down his arms, as if she were reading a treasure map. There were scrolling patterns and sharp points, but no words.

“What do they mean?”

“Nothing, really. I just like the ink. At some point I might think about putting some literature on here. Maybe something that inspires me.”

She sat back and looked at him. “So nothing like ‘Mom’ or some ex-girlfriend’s name on here?”

He laughed. “No. I’m not a momma’s boy, and so far no woman has inspired me enough to ink her name on my body.”
“So far.”

“Yeah. Maybe when I get married I’ll do something permanent like that.”

“You do realize that fifty percent of marriages end up in divorce.”

She leaned back and he shifted, moving down the bed so he could pick up her foot to massage it. He really did have great hands. She thought about what he’d said about marriage.

“While I admire your confidence, I can assure you that everyone goes into marriage thinking it’s forever. It doesn’t always work out that way.”

He lifted his focus from her foot onto her face. “While I can appreciate you’re coming from a point of cynicism since you’ve gone through a divorce, I only intend to get married one time. And I intend for it to be forever.”

“I’m sure the guy who had ‘I love Patty for All Time’ tattooed on his body and then had to have a giant Chevy truck tattooed over it thought his tattoo would last forever, too.”

He arched a brow. “You know this guy?”

She laughed. “No. I made it up. I’m just using it as a random example.”

He picked up her other foot, and she couldn’t resist a moan when he dug his thumb into her sore arch.

“I think your ex made you lose faith in love.”

“Maybe. I’d think all those women who prefer camera time over their interest in you would make you lose faith.”

He shrugged. “They just weren’t the right one.”

“And you still think the right one is out there for you.”

He wasn’t focusing on her foot. He was looking at her. “Yes, I do.”

His gaze was warm. Intense. And she had to admit, she felt relaxed with him, all that tension and after-sex weirdness completely gone.

“Why do you believe in love, Flynn?”

“Because I’ve seen it in action with my parents. They’ve had difficult times and through it all, their love for each other has never once wavered. I’ve seen it with my brothers, who’ve all found amazing, smart, beautiful women who love them unconditionally. And believe me, my brothers aren’t easy guys to love. If they can find it, so can I.”

This was a new side to him. She’d seen the business side of him and the sports side of him. In both, he was driven. She’d seen him be funny and fun. But she’d never seen this serious side. This was a man ready to fall in love.

Too bad she wasn’t the woman for him. Because she was never going to give her heart over to a man again. She’d had it crushed once by someone she trusted, and it had hurt horribly.

Flynn was a nice guy, and she liked him. She was sure there was a woman out there who deserved him. It was really too bad it couldn’t be her.

Unfortunately, tonight was just that. Just this one night. Because a man like Flynn could be habit forming. She’d fallen down that rabbit hole once before, and she’d never allow that to happen again.

She gently extricated her foot from his grip. “It’s probably a good idea for you to take me home.”

He gave her a quizzical look. “You don’t want to stay tonight?”

She wanted to. And that was the problem. She shook her head and slid off the bed to stand.

“I have a lot of things to do tomorrow. Early.”

He got up and came over to where she stood, sliding his arms around her. “I get up pretty early.”

His body was warm and she was tempted to turn around and curl into him, let him coax her back into his big bed.
But he was dangerous to her mind and her body, and most especially her heart. So she stepped away, turned around, and smiled at him. “I had fun tonight. But no. I need to get home.”

Fortunately, he read her signals and nodded. “Sure. I’ll throw on some clothes and drive you home.”

She got dressed and grabbed her things. They got into his SUV and he drove her the short distance to her house. When he got out and walked her to her door, for a split second she thought about inviting him in. But that would defeat the purpose of putting an end to their night together.

She pulled her keys out of her purse, unlocked the door, then turned to him. “Tonight was amazing.”

He tugged her against him. “I thought so, too. I’ll see you soon.”

Before she could walk inside, he tugged her close and kissed her. She fell into the kiss, making her wish they were still naked and in his bed.

One time with Flynn was definitely not enough. Her body curved into his and wanted more. So much more. She finally had to break the kiss with her heart and pulse pounding and everything within her trembling with desire.

You guys. He’s so adorable. 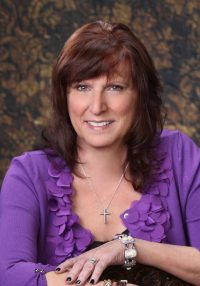 New York Times and USA Today Bestselling Author Jaci Burton is happy to be living her dream of writing passionate contemporary romance. She has written over seventy-five novels to date. Jaci has a Bachelor of Science degree in Business that she is delighted not to be using in her previous life of corporate management. She grew up in Missouri, migrated to California, but has been happily making her home in Oklahoma for the past fifteen years with her husband and dogs. She enjoys being outdoors in the summer and she and her husband are avid Harley riders.

Jaci was honored with the RT Book Reviews Career Achievement Award as well as their Reviewers Choice Award. She has been a finalist in the Bookseller’s Best and National Reader’s Choice Awards, and has won The Romance Studio’s CAPA Award four times.

Jaci is a member of Romance Writers of America.

You can find Jaci on the web at the following locations:

5 responses to “Sunday Spotlight: Rules of Contact by Jaci Burton”