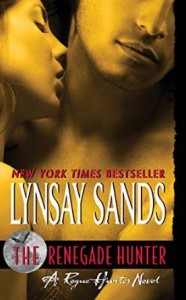 Nicholas Argeneau was once a successful hunter who went after rogue vampires who broke the immortal law. Except no one has mentioned his name in the last fifty years, not since he turned into a rogue himself. But once a hunter, always a hunter. When Nicholas sees a bloodthirsty sucker terrifying a woman, it’s second nature for him to come to her rescue. He had no idea he would also want to kiss her senseless . . .

One minute Josephine Willan is taking in a breath of fresh air, and the next sharp fangs are heading straight for her neck! Luckily, a gorgeous stranger saves her life . . . and gets locked up for his troubles. Can a man who kisses so lovingly and passionately really have committed the crime he’s accused of? Jo isn’t so sure . . . and she’s determined to prove that this renegade hunter is worth fighting for.

Nicholas Argeneau has been on the run for 50 years but he’s not given up hunting rogues. While in pursuit of one such rogue he saves Jo Willan from certain death. Nicholas knows almost immediately that Jo is his life mate – a miracle as he had already found his life mate 50 years earlier, only to have her die a few months after their marriage. Nicholas wants to be with Jo, but knows that she’ll be safer without him. On the run is no place for a woman to be – especially with an immortal (vampire).

Jo’s not sure what all the fuss is about Nicholas, or why his family is locking him in a cell but she doesn’t like it at all. She decides to set him free – but only after a few great heart stopping kisses.

Many events later Jo and Nicholas are on the run together. Nicholas tells Jo of his past – but strangely enough she’s not disgusted with him as he thought she’d be. In fact she doesn’t believe he killed the woman 50 years ago and decides to set out to prove it. When Jo is almost killed Nicholas knows the only way to save her life is to turn her to an immortal but he can only do that with his family’s help. He takes Jo to them and in doing so pretty much seals his fate. But when Jo awakens from her turning she’s determined to make Nicholas’s family see that there is no way he could have killed all those many years ago.

I really liked this book. I thought it had good characters and the premise was one I hadn’t seen in this series before and was caught up in Nicholas and Jo’s relationship. With Sands’ life mates they seem to fall for each other rather quickly, but there’s always some obstacle that they have to overcome first. In this book it was the fact that Nicholas was supposedly a murderer and when he was found the Council would execute him. But Jo believed in his innocence and was determined to save him. I did have a huge issue with the end of the book I thought that the entire book was lessened by the ending. It was left more or less like a cliffhanger and hopefully we’ll get more info in the next book.

Spoiler:
Where I had an issue with the book – the end. Jo goes into a huge diatribe and is determined to make Nicholas’s family see her way of thinking. Yes there was a huge amount of supposition but she did a good job in her long-winded explanation. There was enough doubt put into everyone’s minds that the head of the Council, Lucian, also the head of the Argeneau family, agreed to look into it. Nicholas was found innocent and they were all happy but then nothing was explained as to who it was that actually did it or why or why was Nicholas targeted, etc. It was incredibly frustrating! A very good book was lessened by the fact that (I felt) a huge portion of it was just left out.

Unfortunately the ending of this book changed my rating of the book which is sad since I had enjoyed the book so much until that point.

5 responses to “Guest Review: The Renegade Hunter by Lynsay Sands”