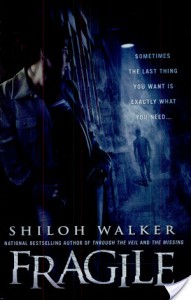 Six years after trading in his combat gear for hospital scrubs, Luke Rafferty still hasn’t found what he’s been searching for: a normal life. At his job, Luke is faced with things just as heartbreaking as those on the battlefield, none more so than the abused children brought in by a pretty redheaded social worker.

Heartbroken
For Devon Manning, being a social working is a rewarding job, but also a constant reminder of her own troubled youth. Devon takes everything one day at a time–unable to form a relationship with anyone except the children she rescues.

A Desire to Heal…
When Luke meets Devon, he thinks he might have found what he’s been looking for, but in order to get the life he wants, Luke has to break through Devon’s emotional barriers and make her realize that his healing touch might be just the complication her life needs…

Devon had a horrific childhood and has pretty much been an island unto herself for most of her life. Although she had a wonderful family adopt her she is still scarred from her early childhood. As a social worker she takes care of the children and adults that she needs to so that she can maybe make a difference in their lives, as one particular social worker made in hers.

When Devon and Luke meet they are incredibly attracted to each other, but Luke puts off asking her out. After finally running into each other off the job Luke makes his intentions to date her known. It starts off rocky but things go very well from there. They find that they have a wonderful time together and enjoy each others company immensely. Luke has guessed at Devon’s past and is being gentle and loving in his courtship of her. But don’t get me wrong, once things heat up between these two it’s mighty hot.

Unfortunately there’s a psycho out to get Devon. She has to live her life, but wonder if she’s ever really safe.

Fragile is a book that got my attention right away. There was something about Devon that appealed to me. Maybe it was because she’d had such a crappy childhood and I wanted her to have a great life with Luke, I’m not sure. But once I started reading I was pretty hooked.

Luke was a hottie but he was truly almost smothering in his over-protectiveness for Devon. At other times it seemed like it was just a boyfriend trying to take care of his girlfriend. Granted she’s being stalked and horrible things are happening but as fragile as Luke thought she was she had lived through hell as a child and come out on the other side as a strong, independent woman. I think he finally realized that at the end.

Devon lived through some horrifying things during the course of this book. It almost got too much for me at times but it was well done. If you like stories with resilient heroines this will be a great book for you.