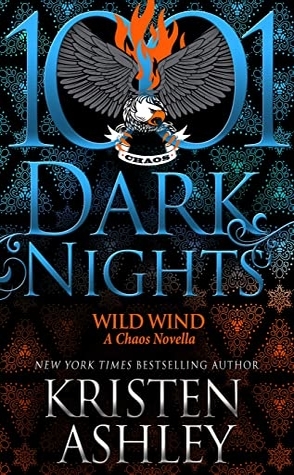 The Chaos Motorcycle Club has won its war. But not every brother rode into the sunset with his woman on the back of his bike.

Chaos returns with the story of Dutch Black, a man whose father was the moral compass of the Club, until he was murdered. And the man who raised Dutch protected the Club at all costs. That combination is the man Dutch is intent on becoming.

It’s also the man that Dutch is going to go all out to give to his woman.

**Every 1001 Dark Nights novella is a standalone story. For new readers, it’s an introduction to an author’s world. And for fans, it’s a bonus book in the author’s series. We hope you'll enjoy each one as much as we do.**

Wild Wind is a novella set in the Chaos MC and features Dutch, Black’s son. Black was murdered before the Club went clean and Dutch and his brother Jagger have been living in his shadow their whole lives.

The first part of this story frustrated me a bit. I didn’t like how Georgiana and Dutch treated each other at first. I also really dislike the way KA inserted herself and her books into this series. Every time it comes up in one of the books it pulls me completely out of the story. I almost DNF’d this book because of it.

That aside, I liked Dutch and Georgie. They were cute together. They also worked well together, which was nice. This isn’t my favorite KA story, but I did enjoy it once I got past the first part and I’m looking forward to Jagger’s story. New York Times and USA Today bestselling author Kristen Ashley brings a new story in her Chaos series…
“You know you can’t keep a good brother down.”
The Chaos Motorcycle Club has won its war. But not every brother rode into the sunset with his woman on the back of his bike.
Chaos returns with the story of Dutch Black, a man whose father was the moral compass of the Club, until he was murdered. And the man who raised Dutch protected the Club at all costs. That combination is the man Dutch is intent on becoming.
It’s also the man that Dutch is going to go all out to give to his woman.
**Every 1001 Dark Nights novella is a standalone story. For new readers, it’s an introduction to an author’s world. And for fans, it’s a bonus book in the author’s series. We hope you'll enjoy each one as much as we do.**

“Invisible Man, this for you, or someone else?” Duke asked, taking Dutch’s attention, and Dutch realized he was so lost to his thoughts, he was working on autopilot and hadn’t noticed he’d approached the register and laid down his books.

“Someone else,” Dutch answered.

“Whole world should read it,” Duke muttered, jabbing a thick finger against the screen of the tablet that stood in for a till.

“Yeah,” Dutch agreed. “Listen, you wouldn’t have any copies of The Hate U Give by Angie Thomas that haven’t been shelved yet, would you?”

Duke shook his head. “Not many givin’ up that book. We get one, you want me to call you?”

He could go to Barnes and Noble, easy.

With Tex as her barista, not to mention Indy and her crew all being the subject of those books that had been published, so folks came in all the time, Indy wasn’t hurting for customers, or cash.

And he had a lot of books.

He had no idea why Fortnum’s was his go-to. It wasn’t about buying local or any of that other millennial shit.

Thinking on it, it was the fact he liked the vibe.

It was the fact that walking in there was like walking into someone’s house.

Shaking off his thoughts, he agreed, “That’d be cool.”

“You wanna stay for a cup o’ joe and a talk?” Duke asked, and Dutch hid his surprise.

The man hadn’t approached. Not in word or deed.

There were the looks he gave Dutch, the ones he exchanged with Tex.

But he never said dick.

“No, got shit to do this afternoon,” he lied.

He had no shit to do that afternoon.

His temper wasn’t usually short, but these days, it could be.

This was why Duke blinked.

“I’m not your son either,” Dutch returned.

“Right then.” Duke’s voice was no longer a friendly rumble. It was tight. “First, my age can’t have escaped you, considerin’ all this gray hair and wrinkles, so you are a boy to me, and you will be until you’re sixty and I’m dead. And second, any man’s a man at all, a man that’s younger than him and obviously struggling is his son. A son he looks after.”

Christ, was he not hiding it?

“I’m not struggling,” he lied again.

“Brother, just ring me up so I can get on with my day,” Dutch demanded.

Duke was silent a beat.

He then finished ringing him up, and Dutch paid.

Duke slid the books over the counter toward Dutch.

Dutch had turned, avoiding Tex’s eyes as he did, and started heading toward the door when Duke called, “You know that door is always open, but the one to my cabin in Evergreen is too, man.”