It was a pretty good week here in Tracyland. No complaints which is always a good thing.
Diet and exercise – exercised twice and lost no weight. I’d be upset about that but seeing as with PMS I usually gain 3 so I’m pretty happy with staying even. lol Total lost still 2.2 pounds.
Hubby and I went to an auction at my work and I ended up with an iPod shuffle (for only the price of a $1.00 raffle ticket – woohoo!) Anyone have one? Can you put audio books on those or do they shuffle the chapters? lol Just curious.
Good reading week this past week:

My first read for the week was Man from Tennessee by Jennifer Greene. This was a reunion story between a married couple that’s been separated for 5 years. I’ll post my review on Friday. 🙂

Next up was Claimed by Desire by KayAnna Kirby. This was the story of a woman who had a one night stand with the hopes that more could come from it but when she woke in the morning the man was gone. Now she’s pregnant and runs the man again. He wants them to be together but she’s resisting. You can read my review here. 2 out of 5

My next read was actually a re-read of a book that hasn’t come out yet. How can you do that, you might ask. Well it was Kiss of Snow by Nalini Singh and it comes out at the end of the month. When Holly first sent it to me in March to read and review for The Book Binge I gobbled that sucker up and loved it! I know, I didn’t tell you – I’m so mean. I wanted to give it a couple of months and then re-read and see if I felt the same about the book now that I’d read it and it was just as good if not better the second time around. This is Hawke’s story. He’s the alpha of the SnowDancer wolf changeling pack and he and the Psy, Sienna, have been circling each other for years. She was way too young before but he’s finally made his move. Along with the awesome romance we get lots of political Psy/Changeling conflict and it was just SO.GOOD. Excellent book. 5 out of 5

Rinse and Repeat by Amberly Smith was the story of Peat the repeater who is trying to save the life of Jake and finds himself falling in love. It’s a great story and one I’d recommend. You can read my review here. 3.75 out of 5

Devil’s Own by Veronica Wolff is book 2 in the Clan MacAlpin series and I really liked this book. The story was about Aidan who was kidnapped 13 years prior and worked as a slave until he escaped. Now he’s at home and trying to find the man who kidnapped him. But he needs assistance and finds it in a neighbor, Elspeth, who helps him learn to read while he works on her family farm to pay for the lessons. This was a very sweet romance that I really enjoyed. There was definitely some intense moments with Aidan and kidnappers but for the most part just a nice romance. 4.25 out of 5 (read for The Book Binge)

I haven’t read any Yaoi Manga for a while – bad Tracy! I only had one – Stallion by Kosen. While I really liked the graphics I didn’t really like the stories all that much. The Stallion story was the best of the three but very abbreviated. There was a lot of advertising in the book– one including what looked like a full grown man and a boy of about 12 – ewww. 2 out of 5

One of my Tracy’s TBR Challenge reads for the week was Cruel Enchantment by Anya Bast. This is book 2 in the Dark Magick series and it was a good one. The story was about Emmaline who is Seelie but had escaped imprisonment when the rest of the Fae was walled and warded into their own area. She was an assassin back then and had accidentally killed Aeric’s love. Aeric hates Emmaline and wants to kill her but when he has the chance he finds himself changing his mind. I really liked this story it had a lot of ins and outs that made the story that much better. At first I didn’t see the romance as Aeric started falling for Emmaline but in the end I was happy to see them together. 4 out of 5

Last for the week was another Tracy’s TBR Challenge read that I read for Wendy’s TBR Challenge – the Kept Woman by Susan Donovan. This was a pretend engagement story (the theme for May) and it was a good one. I’ll post my review on Wednesday.
My Book Binge reviews that posted this past week:
The Sweetest Thing by Jill Shalvis
This Side of the Grave by Jeaniene Frost
Happy Reading! 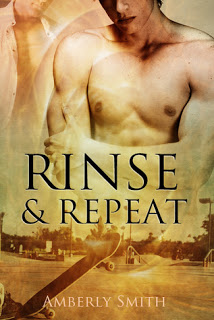 After reliving the same day sixty-two times, Repeater Peat Harris is about to give up on his latest case: saving Jake Schwinn. In the past, Peat has solved some seriously twisted crimes, caught the bad guys, and kept an emotional distance. But this time, his heart’s involved, a definite must-never-do on Repeats, and he can’t just walk away—even if that means putting himself into the bullet’s path.


A year ago, Jake’s best friend was gunned down, and Jake has been playing bait to catch the killer. But now a wicked-looking hottie named Peat is warning Jake that he’s about to die—again—unless they can catch the shooter. Yeah, right. Then Jake starts to remember the previous Repeats and how he and Peat hooked up…

Peat is a repeater – he gets “called” (or something similar to that) to certain people and locations and he has to repeat that one day until he changes the circumstances of the day enough that the next calendar day will appear.

He heads to Boise, Idaho to Jake Schwinn who is a young college student and avid skate boarder. The first time Peat sees Jake is in a skate park. No sooner had he found him when Jake is shot and killed. Peat now knows that his job is to save Jake from death and find out who the killer is.

Days pass and while Peat makes some progress on the case he can’t seem to get it right. After two months of trying Peat finds himself falling for Jake – even though Jake can’t remember him from day to day…or can he?

Jake’s not sure what’s going on but he seems to “know” Peat, and things about Peat, but he can’t actually ever remember meeting Peat – which is just all kinds of freaky for Jake. Despite the freakiness of the situation, however, Jake feels inexplicably pulled to Peat and when Peat starts spewing information that is completely impossible, Jake starts to believe.

What an interesting concept – someone who repeats days until they get it right. But unlike the movie Groundhog Day Peat has to save someone else instead of himself. As we see in the story when we learn about some of Peat’s past repeats, they don’t all go the way he wants them to and sometimes people get hurt no matter what he tries. With Jake, Peat just wasn’t willing to give an inch and have Jake end up getting hurt.

I can’t imagine how hard and frustrating the whole situation was for Peat. He’s trying everything he can think of to help Jake and find the killer but yet the day keeps repeating. Then there are Peat’s feelings for Jake that start growing but no matter what kind of headway Peat might make with Jake in a day, at midnight it starts all over with Jake not knowing who Peat is. Wow – that’s gotta hurt the old heart. I know I hurt for Peat on several occasions during the story.

My biggest niggle with the story was the fact that we never truly found out how a repeater comes to be – they just ARE. As a reader I found that incredibly frustrating – I can’t imagine how frustrating it was for the repeaters themselves. When the repeaters were nineteen they just started repeating days until they figured out what to do. There were no guides, no explanations, no clue as to how many other repeaters there were out in the world, no idea if they would be repeaters for the rest of their lives. Ug – maddening! And if that’s not enough how exactly do you have a relationship with someone? I mean, yes there are days in between repeats, normally, but though that other person, in this case Jake, has no idea that a repeat is happening, Peat knows and has to be away from Jake for untold days. I can’t imagine what a strain that would put on one side of a relationship.

This also brings me to the surface thoughts about life being manipulated and whether that’s right or wrong. Since we have no idea who the creator of the repeaters is…God, possibly? How can we say that what they’re doing is right or wrong? Is that person the repeater is helping not supposed to die that day or have that awful thing happen? IDK. I think that gets into a whole theological question that’s a bit deep for this blog but it does make me think.

In the end I liked the book and would definitely read something by this author again.