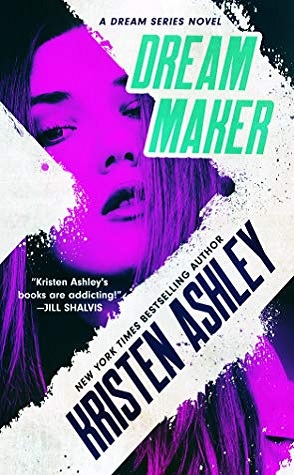 From the New York Times bestselling author of the Dream Man and Rock Chick series comes a brand new story about love, friendship, and the bonds of sisterhood.

Evie is a bonafide nerd and a hyper-intelligent chick who has worked her whole life to get what she wants. Growing up, she had no support from her family and has only ever been able to rely on herself. So when Evie decides she wants to earn her engineering degree, she realizes she needs to take an alternative path to get there. She takes a job dancing at Smithie's club thinking this would be a quick side gig, where she can make the money she needs. But with her lack of dancing skills and an alpha bad boy who becomes overly protective, Evie realizes this might not be as easy as she thought.

Daniel "Mag" Magnusson knows a thing or two about pain, but the mask he wears is excellent. No one can tell that this good-looking, quick-witted, and roguish guy has deep-seated issues. Mag puts on a funny-guy routine so he can hide his broken heart and PTSD. But when Evie dances her way into Mag's life, he realizes that he needs to come face-to-face with the demons of his past if he wants a future with her.

Evan is a 27-year-old genius who just wants to finish school and make something of herself.  Unfortunately, her family is constantly holding her back.  She works as a computer repair person part time and strips the rest of the time.  When she finally makes enough money to work on her degree further, her family calls and someone always needs some money for something.  She’s under-appreciated by them, to say the least.

When her brother, Mick, gets arrested once again she heads to see him assuming he’ll ask for bail money – but that’s not the case.  This time he asks her to meet someone and do what he says – all very sketchy, scary and shady but she’ll do what he asks because that’s what family does, right?  That same night she has a blind date with someone her friend Lottie set her up with.  She’s not excited about it at all. When she opens the door to Daniel “Mag” Magnusson she’s loving the eye candy, but still isn’t into him.  Things go awry with their date almost immediately and Mag ends up discovering the “meet” she’s supposed to go to for her brother.  He protects her that night and even calls in his friends to help protect her when the shit hits the fan later in the book.

Through a series of events Evie ends up staying at Mag’s condo, but she plans on moving out quickly.  Evie doesn’t count on liking Mag more and more each day, but she does.  Fortunately for her, Mag seems to like everything about her as well.

While I never read the Rock Chicks series that didn’t impeded my enjoyment of this story.  I was introduced to characters I’d read about in other series, and also the RC’s in all their glory.

Evan was such a good person.  I liked her so much and just wanted her to get everything she wanted in life.  In this story we watch her blossom into the person she should have been year earlier if her family hadn’t been holding her back and down her whole life.  Watching her come into her own was awesome.

Danny aka Mag was a good guy who had some issues.  He was obviously an Alpha male (of course he was, this is a KA novel!) but also had some problems with anger.  He only really let loose of that anger a couple of times, but I appreciated KA showing us instead of just telling us. Despite the anger he was a kind and giving man.  I thought he was perfect for Evan.

Overall this was a good story.  I stayed up late to finish this one and I’m glad I did.  This one is definitely worth reading – even if you didn’t read the Rock Chick series. Charlotte “Lottie” McAlister is in the zone. She’s ready to take on the next chapter of her life, and since she doesn’t have a man, she’ll do what she’s done all along. She’ll take care of business on her own. Even if that business means starting a family.

The problem is, Lottie has a stalker. The really bad kind. The kind that means she needs a bodyguard.

Mo doesn’t say much, and Lottie’s used to getting attention. And she wants Mo’s attention. Badly.

But Mo has a strict rule. If he’s guarding your body, that’s all he’s doing with it.

However, the longer Mo has to keep Lottie safe, the faster he falls for the beautiful blonde who has it so together, she might even be able to tackle the demons he’s got in his head that just won’t die.

But in the end, Lottie and Mo don’t only have to find some way to keep hands off until the threat is over, they have to negotiate the overprotective Hot Bunch, Lottie’s crazy stepdad, Tex, Mo’s crew of frat-boy commandos, not to mention his nutty sisters.

All before Lottie finally gets her Dream Man.

And Mo can lay claim to his Dream Girl.

**Every 1001 Dark Nights novella is a standalone story. For new readers, it’s an introduction to an author’s world. And for fans, it’s a bonus book in the author’s series. We hope you'll enjoy each one as much as we do.**

Lottie’s sister has a huge group of friends who married into a huge group of friends, so they have a big circle. But she’s always felt she was outside of it. Just the “little sister”, never actually part of the crowd. When she ends up with a stalker she finds herself being guarded by a big, silent guy named Mo. She’s seen him around the group, but she doesn’t know him very well. She hopes to change that, however, because Mo is hotter than hot.

Mo knows his size is intimidating and so are his looks. He’s sure a beautiful woman like Lottie would never be attracted to him..plus, she’s a stripper and he’s not about that. But as they spend time together, he can’t deny Lottie might be the perfect woman for him.

Still, I liked Lottie and how she accepted Mo for who he was, without wanting to change him. This is one of the better KA stories I’ve read recently.