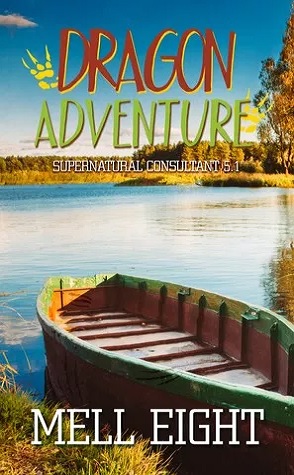 Aqua and Rios are bored, which is always a recipe for disaster. They decide that taking a trip to visit Nickel would be a ton of fun, so they hop on a boat and go sailing down the river. Niagara Falls separates the two kits from their destination, not that they're aware of that fact, and their fun adventure quickly turns into a desperate fight for survival.

Aqua and Rios are water dragons, approximately 15 years old, and are the foster sons of William Armistead.  They are at the North American Territory Leader’s Conference in Canada and since their “Uncle” Willy controls all of Canada he brought them with him so that they could understand what’s going on – he’d been teaching them about his duties. Of course they’re bored out of their minds and as their Uncle Dane didn’t bring his son Nickel with him they have no one to play with.

When they’re dismissed they decide that they’re just going to go visit Nickel. They get out a map and figure it won’t take long at all to get to Nickel as it’s only a few inches of map space – by river…in a rowboat. Obviously it takes longer than expected even with their supernatural powers and they end up getting to shore so they can sleep that night.  Rios is awoken by a sound and finds a Nix, a water shape-shifter, who’s trying to save the waterways from drug dealers. Rios gets attached to the Nix – who he names Nixie – very quickly and decides to help.  The pair get into some trouble but Uncle Willy is there to save the day in more ways than one.

This was a very short but very cute read.  It’s set in the world of the other Supernatural Consultant books, and Dane is in it, but none of Dane’s dragon kits are in it.  Aqua and Rios were adorably rambunctious and I enjoyed reading about their antics.  The story is told with the thought that Rios and Nix will eventually mate but that’s just kind of implied.  They’re too young at the moment to go that far. 🙂  The only reason this story got a lower rating was because of length.   I just couldn’t get too into it all as it was super short.

If you’ve read and enjoyed all of the Supernatural Consultant books so far then I think you’ll enjoy this one as well.