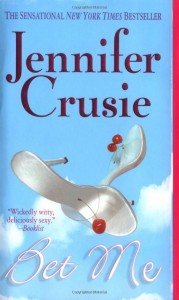 Minerva Dobbs knows that happily-ever-after is a fairy tale, especially with a man who asked her to dinner to win a bet. Even if he is gorgeous and successful Calvin Morrisey. Cal knows commitment is impossible, especially with a woman as cranky as Min Dobbs. Even if she does wear great shoes and keeps him on his toes. When they say good-bye at the end of their evening, they cut their losses and agree never to see each other again.
But Fate has other plans, and it's not long before Min and Cal meet again. Soon, they're dealing with a jealous ex-boyfriend, Krispy Kreme donuts, a determined psychologist, chaos theory, a freakishly intelligent cat, Chicken Marsala, and more risky propositions than either of them ever dreamed of. Including the biggest gamble of all—true love.

This review was originally posted on June 2, 2008.
This wasn’t my first Crusie book. Years ago I read Charlie Something-or-Other. I didn’t really care for it. In fact, I had no idea why everyone was so crazy about this author. Yes, the book I read was an early Crusie novel. That’s why I wasn’t in any hurry to give her another try. Look at Linda Howard, Julie Garwood, Judith McNaught…all authors whose earlier works are more loved than their more recent books. That’s my excuse for waiting so long to read Bet Me. I guess I have to thank Holly b/c I would have most likely not tried to read it again if she wouldn’t have suggested it in such a wonderful way. (Holly: Am I good like that, or what? It’s ok, you don’t have to bow down to my greatness..we know. We know. LOL)


That being said, I’m so glad that she persevered b/c I loved this book.

Min Dobbs decides to teach Cal Morrisey a lesson when she overhears him making a bet that he can get her into bed. Deciding that she will string him along for three weeks until her sister’s wedding, Min accepts his invitation for dinner. It only takes one dinner for Min to admit that she doesn’t have it in her to string someone like Cal along. At the end of the night, they part ways, both satisfied that they will never see the other again.

Fate definitely had a way of laughing in their faces. Again and again Min and Cal ran into each other. Yet each time they parted, that was it. They were never going to see each other again.

There is really no easy way to review this book other than to say if you haven’t read it, you’re missing out. Crusie has some of the best dialogue that I’ve ever read. The relationship between Min and Cal was far from an easy one. Though they both had admitted to themselves that the other is “the one”, they both had hangups that wouldn’t let them admit it out loud. Add in Min’s jealous ex-boyfriend and Cal’s rational ex-girlfriend and you have a book that you can’t put down.

I loved everything about this book from how it began, to the continuing conflict, to both Min and Cal’s parents, to the ending. Everything about it just hooked me from page 1.

9 responses to “Retro Review: Bet Me by Jennifer Crusie”