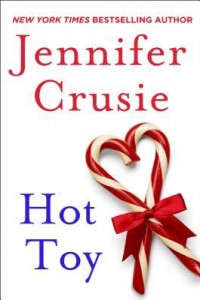 Mayhem ensues under the mistletoe as a determined shopper grabs the very last hot toy action figure off the shelf, only to find herself plunged into the middle of a real-life spy game and in the arms of a sexy secret agent…

Trudy is a good aunt. She wants her nephew Leroy to have a wonderful Christmas but the only thing he wants this year is a Major MacGuffin action figure that spews toxic waste. Leroy’s father was supposed to buy it for him but he ran off with the nanny instead. Trudy is out at an old toy store in the hopes that they still might have one. She doesn’t find the right doll but she runs into Nolan who she went on three dates with and then he never called again.

When Trudy finds last year’s Major MacGuffin on a shelf she’s thrilled. When she runs into her father’s old research assistant and he tells her that he heard of a warehouse that has this year’s doll she’s excited but leery to get in the cab with him. When Nolan pushes his way into the cab to go too she decides it’s a good thing – until they all get to the warehouse and things start to get a little hinky, Reese isn’t who he says he is, neither is Nolan and they’re both after her MacGuffin! She’s not giving it up and she’s certainly not going to be trusting either of them!

This was the second time that I’d read this short novella but it was just as good the second time around. Trudy is such a character. She loves her family and will do just about anything for them but she does it with attitude – which I loved. Then there’s the way she stands up to Nolan which was classic. I wish I’d had the guts to tell guys off like that when I was dating (way back when). Lol

The story is sweet and cute but also has sarcasm, adventure and romance all wrapped up into a nice little package. If you haven’t read this one yet you’ll definitely want to – it’s a keeper.