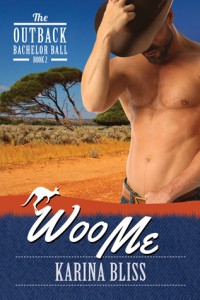 Can true love overcome a bad hide day and a series of unfortunate events?

Disillusioned in love, Jen Tremaine is done with men. So when her best friends dare her to wear a cow costume to their reunion at an Outback Bachelor and Spinster Ball, she's all over it. Who would have thought dressing as a heifer would make her irresistible to a bunch of lasso-twirling, drunken cowboys?
Maybe you should have thought this through, says the sexy security guard who keeps finding her at the center of trouble. Even though Jen's always dismissed soul mates as a load of bull, the sizzle between them is making her wonder: What if you met The One while wandering lonely as a cow? Would you find the courage to become a believer?
When ex-Special Forces soldier Logan Turner is roped into helping out with security at the B&S ball, he isn't expecting to find love - but after months in all-male company he sure is hoping for lust. He certainly isn't expecting to fall for a feisty, funny, trouble-making Cowderella. Only problem is, she's leaving Australia tomorrow. Convincing Jen they can still have a future together may wind up being the toughest mission of his life.

Woo Me is Book 2 in The Outback Bachelor Ball Series. Don't miss out on Book 1 - Win Me by Joan Kilby and Book 3 – Wait For Me by Sarah Mayberry.

Jen thought she had a good thing with her long-time boyfriend, until he suddenly announced his desire to get back with his ex-wife. Hurt and confused, Jen decides what she needs is a change of pace and takes a job with a former company that starts right away. But first she plans to meet up with her best friends at The Outback Bachelor Ball. In protest of bad relationships and philandering men, she decides to wear a cow costume. She expects to suffer through a torturous night then move on with her new life. What she never could have predicted was that she’d meet a sexy soldier who sees past her cow costume to the woman beneath – and makes her want things she swore off for good.

Logan just resigned his commission in the military and got suckered into working security at the Ball by his sister. He keeps having to rescue “Cowderella” from strange situations. Her sense of humor and dry wit intrigue him, and it isn’t long before he’s trying to get to know her better. They end up spending the night together, but she’s upfront that she isn’t interested in anything long-term. She’s been burned one time too many. He thinks they’re worth fighting for and he urges her to consider getting to know him better. Due to a misunderstanding, he misses it when she shows up at their designated meeting place, which just proves to her, once again, that love isn’t worth the risk.

To be perfectly honest, I expected Bliss to write the book featuring the country music star. I was surprised to see Bliss author this novel instead. She did really well with it, though. I really enjoyed Jen’s character. She was tough and a bit cynical, but also had a good heart and a lot of moxie. I cracked up while she was in the cow suit. She was quick witted and sharp. I liked her a lot. Her issues with love and her desire to protect herself made perfect sense. I was glad to see Logan push to break down her barriers.

Logan wasn’t as well fleshed out as Jen was, but I still really enjoyed him. He was strong and steady, and just what Jen needed. His determination to do the right thing and his strong values really came through. I liked that he was willing to take a chance on Jen and push for a future.

I was very satisfied with the ending, both in terms of their relationship and in the way it advanced the next story. This series is really working for me.

Review: Wait for Me by Sarah Mayberry