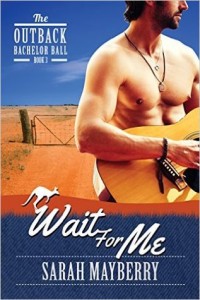 Reviewer: Holly
Wait for Me by Sarah Mayberry
Series: The Outback Bachelor Ball #3
Also in this series: Win Me, Woo Me, Win Me, Woo Me, Wait for Me
Publisher: Self-Published
Publication Date: October 20, 2015
Add It: Goodreads
Amazon | Barnes & Noble | The Ripped Bodice | Google Play Books

Sometimes it pays to wait for the things you want, even if it’s the hardest thing you ever do.

Beth Walker hasn’t just been burned by her philandering country music star ex, she’s been barbecued to a crisp. Coming home to Australia and into the arms of her best friends is exactly the balm she needs. Cocktails and laughter at an Outback Bachelor and Spinster Ball seem like the perfect distraction. Until she bumps into the last person she wants seeing her heartsick and pathetic — Jonah Masters, rising country music star and witness to the failure of her marriage. If only she’d met Jonah first. Now she’s broken and won’t ask him to wait until she heals.

Jonah can’t believe he and Beth are finally standing under the same stars. The connection they shared on the road years ago has haunted him but he wouldn’t pursue a married woman. Now she’s free, and Jonah can’t refuse the one night Beth impulsively offers. Can he convince the woman he’s always loved that he’ll wait — however long it takes — for her trust?

Wait For Me is Book 3 in The Outback Bachelor Ball Series. Don't miss out on Book 1 - Win Me by Joan Kilby and Book 2 - Woo Me by Karina Bliss.

Of the three books in this series, this is my favorite.

Beth was royally screwed over by her ex, a country music star who cheated on her for the entirety of their marriage. He had her convinced the rumors were just that, and she ignored evidence to the contrary in order to make her marriage work. When the women he cheated with came forward, she was humiliated on top of being betrayed. Several months later, she’s still in hiding and wants nothing to do with men. Her best friends talk her into attending the Outback Bachelor Ball and dancing with any man who asks that isn’t a total creep. She agrees, but only to make them happy. When she runs into Jonah Masters, she’s happy to see him, but also ashamed, since he was there when she first heard the rumors of her ex cheating, and he knows she chose to ignore them.

Jonah is thrilled he found Beth. He was one of the acts on her ex’s tour. They spent a lot of time together and he felt a serious connection to her. He’s been thinking about her a lot since the news of her husband’s infidelities came out. He can’t wait to catch up with her and see how she’s really holding up. He isn’t surprised to see they still have a striking connection, but he is surprised by the blinding amount of lust he feels for her – and that she seems to return.

Beth agrees to spend some time with Jonah, but she isn’t prepared for the feelings he stirs up inside of her. After they spend the night together she agrees to accompany him on a trip to look at a potential new home for himself. She can’t deny the connection between them, but she isn’t in a place where she can pursue anything with him. She can’t ask him to wait for her. He can’t do anything but.

I was most anxious for this book at the beginning of the series. Beth was pretty broken in the beginning, and I wasn’t sure how Mayberry was going to make a happily ever after – or even a happy for now – work. Beth had her world rocked when her husband’s cheating came to light in such a public way. Not only was her heart broken, but she lost trust in her judgement. How could she have stayed with a man so long when all the signs pointed to his perfidy and she just ignored them? To buy into her falling for someone else in short period of time wouldn’t have made sense. Thankfully that wasn’t the case.

Jonah was a well-balanced character. I thought there’d be more angst over the fact that he, too, was a country music star, but Beth recognized the differences between him and her ex. I thought that was well done. It can be frustrating when a woman paints all men with a tarnished brush because of the actions of one. It was easy to see why Beth felt for him the way she did. He was a strong, steady guy whose values and ideals lined up with her own. They had great chemistry in and out of the bedroom. There was a strong connection between Beth and Jonah that came across very well. I believed in their chemistry and their friendship. Since they knew each other before the burden of forming a connection wasn’t there.

When Beth makes the decision to leave Jonah behind to find herself and establish her life, I was both sad and relieved. She needed to find herself again, and put some distance between her old life and her new one. I’m so glad she took that time.

I really loved both Beth and Jonah, together and on their own. They were well suited and their friendship and connection really worked for me. The ending was very satisfying. I finished the book on a happy sigh with the feeling that all would work out as it should.

To be honest, I’m sad to see the series end. I would have loved more time with all three woman. Do yourselves a favor and pick this up now.