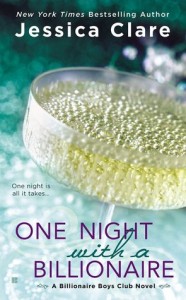 Fans of Maya Banks, Melody Anne and J. Kenner - prepare to be dazzled by Jessica Clare's Billionaire Boys Club.The Billionaire Boys Club is a secret society of six incredibly wealthy men who have vowed success in business - at any cost. But success when it comes to love is a different matter...
Kylie may be a makeup artist to the stars, but she knows what it feels like to be overshadowed. Especially by her famous boss, the pop star Daphne. That's why she's stunned - and delighted - when one night at a party, she attracts the attention of a gorgeous stranger. But when Daphne decides she wants the handsome billionaire for herself, Cade Archer is suddenly off-limits for Kylie...

Cade has known Daphne for years, and always wondered if she might be the right woman for him - even though she never gave him the time of day. But one sizzling night with Kylie has changed everything. So why is she suddenly avoiding him? Fortunately Cade is determined to get what he wants, and he'll do anything to show Kylie she can get everything she wants too...

Cade Archer grew up in a trailer park along with Audrey and Daphne Petty. He always had a thing for Daphne and she was his first love. Over the years he held on to that attachment even when Daphne became a pop star and then a drug addict. He’s not sure why he held on so long but when he meets Daphne’s make up artist, Kylie, it really has him questioning himself. Is he really in love Daphne or are his feelings more the friendship type of love? The feelings he has for Kylie blow away anything he’s ever had for Daphne and he decides to pursue Kylie to see if what he feels is real.

Kylie is a woman who has been put the ringer during her life. Her parents died when she was ten and she was then housed with her grandmother who did nothing but berate and demean Kylie for her weight and what a “burden” she was. After living with that, and then having a boyfriend who pretty much treated her the same way, Kylie doesn’t have much self-confidence when it comes to men. When Cade starts paying attention to her, and then they have a drunken one night stand, Kylie takes it at face value. She’s a bit surprised when Cade keeps showing up and paying more and more attention to her. Kylie loves the attention but it poses a problem with her boss. Daphne is still under the influence of drugs she’s deluded herself into thinking that she and Cade are together. Cade does everything in his power to make her believe otherwise but it’s definitely an issue. When Kylie and Cade have another drunken night in Vegas and wake up married, Kylie is scared that Cade will eventually consider her a burden – which isn’t true at all. She’s not prepared for what happens when both Daphne and the record studio find out about Cade and Kylie.

This was another great book in the Billionaire Boys Club series. During the previous books I feared that Jessica Clare was going to try to clean Daphne up and have Cade end up with her. I’m so glad that she chose someone else for this gentle and generous man. He always seemed like the most kindhearted of the club and this book proved that was true. He truly didn’t want to hurt Daphne but he had to follow his heart and that was leading him to Kylie. I’m so happy he finally opened his eyes!

Kylie was a wonderful character.   I loved her sense of style and her consideration of others. Her stubbornness with the whole being a “burden” thing got a bit annoying but I could understand it. After living her entire life believing she was a burden to people she wouldn’t stop thinking that in a day or so. That kind of conditioning takes time to break.

Overall the story was a good one and I really enjoyed reading it and felt it was a very good end to the series.