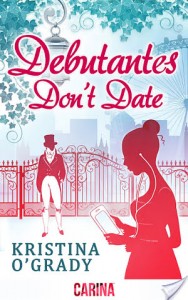 At the stroke of midnight...

One minute Grace Lancaster is an overworked event manager organising 2013’s New Year’s Eve ball... The next she’s kissing a rather gorgeous man at the Regency themed party. Everyone’s entitled to an out-of-character New Year’s kiss, right? Except Jasper Mossman, Earl of Bingham, isn’t at a costume party - he’s a real-life gentleman from 1813...

And, it seems, kissing a man in Regency London has consequences!
What Grace considers normal behaviour scandalises Regency society and so far she’s provided the irrepressible gossips of the ton with a season’s worth of conversation! In a scramble to protect her reputation, as well as his own, Jasper insists that they marry for the sake of her honour. Marrying Mr Darcy might be a 21st century girl’s dream – but the reality is far from romantic. Corsets are uncomfortable, no running water is disastrous! Grace had always planned on falling in love before she got married, but when Jasper takes her in his arms she just might believe she’s finally found her very own Prince Charming.

Grace is an event planner and is at a New Year’s Eve costume ball in 2013. She’s having a good time until the lights go off and she gets very dizzy. Next thing you know she’s crawling out from under a table with her skirts around her waist – then hits her head – and starts wondering what the heck happened. She is assisted from her predicament by a very good looking man. Once she’s up on her feet she leads the man to an alcove and begins to thank him for his assistance by kissing him and practically attacking him. They are having a great time making out when they are caught in the act. Grace doesn’t think this is such a scandalous thing but she has no idea that she has just time traveled and is now in 1813, not 2013, and it’s INCREDIBLY scandalous.

The man who assisted Grace, and ended up kissing her, was Jasper Mossman, the Earl of Bingham. It was highly unlike him to be kissing anyone in public so to get caught was crazy. He had been promised in marriage to someone since birth but had been putting off actually asking for her hand. Now that he and Grace had been caught he was honor bound to marry her instead. Only Grace doesn’t want to get married – she wants to go back to 2013. Jasper finds himself falling in love with Grace and wants nothing more than to be with her the rest of his life. She’s not being very cooperative, however.

When Grace figures out that she’s traveled through time she’s more than a bit shocked. She confesses to Jasper’s sister about the time travel, as she’s staying with her, but no one else knows. She’s highly attracted to Jasper and they can’t seem to keep their hands off of each other whenever they’re together but she doesn’t know when she’ll go back to 2013, or even if she will.

Then there’s the brother of Jasper’s previous intended who owes a lot of people a lot of money and is pissed off that he now won’t have access to Jasper’s money. He devises a plan that will get Grace out of the way and so will leave Jasper open to marry his sister, Anne.

Debutantes Don’t Date was a cute little story that I had some definite issues with. I thought that the book had a good premise to it but unfortunately I didn’t really care for the execution all that much. The POV’s kept skipping around – head hopping from person to person – and I never knew what/who I was going to get next. And, as much as I liked the premise of it all it ended up being pretty convoluted. The character all seemed to be doing things that they would have normally done and that made it way more fantastical to me.

First there’s the time travel part of it all. Grace time traveled but never did she seem aware of history being changed or the impact her being there might have on…everything. It was a little bizarre to have a heroine be that oblivious.

The romance in this story was more lust driven than anything else. Yes, we were told that Jasper and Grace had tea together and talked every day but we were never shown those incidences. Had we been privy to their conversations it might have solidified their relationship in my head.

The threat from the brother of Jasper’s almost fiancé was a bit far fetched but we were shown how bat shit crazy the guy was so I think the author tried to explain things well.

While there were things about the story that I didn’t care for I thought it was a cute, sweet story.

This title is available from Carina Press. You can buy it here or here in e-format. This book was provided by the author in exchange for an honest review.