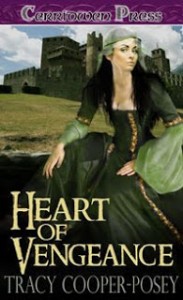 To find her father’s killer, Helena of York must pose as a Norman in the great halls of Richard I’s England. Should she be unmasked, her life will be forfeit.

Stephen, Count of Dinan, once Richard’s friend and trusted knight, is outcast for reasons shrouded in mystery. Known as the “Black Baron”, he is friendless in a glittering world he despises. His only goal is to restore his honor and once again serve his king.

Helena’s only desire is to kill the man who destroyed her father and her future. Stephen’s suspicions draw him into Helena’s web of deceit, and the two outsiders find themselves tangled in a greater conspiracy that threatens the throne of England itself, while their embattled hearts grapple with a far greater challenge.

Helena of York is on a mission. She needs to find the one man who has information about her father’s death and he will lead her to the murderer. In order to do this she’s been posing as a titled Norman woman. By a strange twist of fate the Count of Dinan comes to her rescue one day. They form a bond and make a promise to each other that they feel cannot be broken.

When Prince John makes arrangements for one of his faithful yet incredibly loathsome advisors to marry Helena she finds that this is a predicament she may not be able to free herself from – especially since said advisor, Savaric, knows that she is not the lady Isobel. While Stephen is there when he is needed it doesn’t help the end plight that they find themselves.

We discover that Helena is trying to find her father’s killer, yes to clear his name, but for such a bigger and quite noble reason. But she is set on her course of action and no words, even from the man she loves will sway her to do otherwise. Stephen adores Helena but with revenge at the forefront of her mind, and him so set against revenge of any sort he sees them coming to an impasse.

I would love to tell you all of the ins and outs of this story but it is one that has to be read to truly be appreciated. It is a medieval romance filled with political intrigue and manipulations, scheming mothers, titled yet outlawed Earls, but most of all, love. Though this story is only about 250 pages long it’s truly an epic tale that I thoroughly enjoyed. If you love a good medieval story this would be a great book for you.

This book was received from and my review was requested by the author.

5 responses to “Review: Heart of Vengeance by Tracy Cooper-Posey”