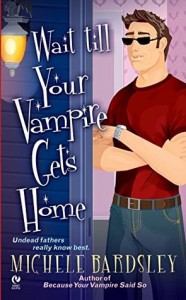 To prove her journalistic chops, Libby Monroe ends up in Broken Heart, Oklahoma, chasing down bizarre rumors of strange goings-on and finding vampires, lycanthropes, and zombies. She never expects to fall in lust with one of them, but vampire/single dad Ralph Genessa is too irresistible. Only the town is being torn in two by a war between the undead and Libby may be the only thing that can hold Broken Heart together.

Libby is part of PRIS, the Paranormal Research and Investigation Services, and her parents were the founders. Her and her parents are in Broken Heart, Oklahoma trying to see if the rumors of paranormal beings is true. They’ve searched all their lives to find the evidence but it’s always been just out of their reach.

Libby meets Ralph is a very odd way that involved vampires, a zombie and dragons falling from the sky. When one of the dragons kisses Libby she becomes infused with something…more. She has no idea what it is but the queen of the vampires and lycanthropes isn’t about to let her leave Broken Heart until she finds out.

Libby is imprisoned while tests are run on her. During this time she is having non-stop thoughts, lustful and otherwise, about Ralph. She just can’t seem to get him out of her head.

When Libby is eventually set free as Ralph as her semi-guard she is attacked by dragons who are bent on taking her out permanently.

This was a very cute book. It kind of had a Mary Janice Davidson feel to it, but yet it really held it’s own in the appeal department. I think the similarities weren’t in the story line but the tone of the writing and that made it just fine for me. While this is book 4 in the Broken Heart Vampire series I didn’t feel I had to have read them in order to understand what was going on in this book.

Libby and Ralph were very cute together. There was conflict in the book, but only minimally with their relationship which was nice. Ralph was a widower with 2 small sons and Libby took to them immediately which I also liked.

I would say that my only issue was how accepting all of the newcomers, Libby and her parents, to Broken Heart were. I know this was explained because the family had grown up eating paranormal info for breakfast but it still just rubbed me wrong while I was reading.

These types of books always have the ultimate HEA’s in the fact that everyone loves everyone at the end of the book. For a book that makes me laugh it’s something that I will take easily with a grain of salt.

2 responses to “Guest Review: Wait Till Your Vampire Gets Home by Michele Bardsley”