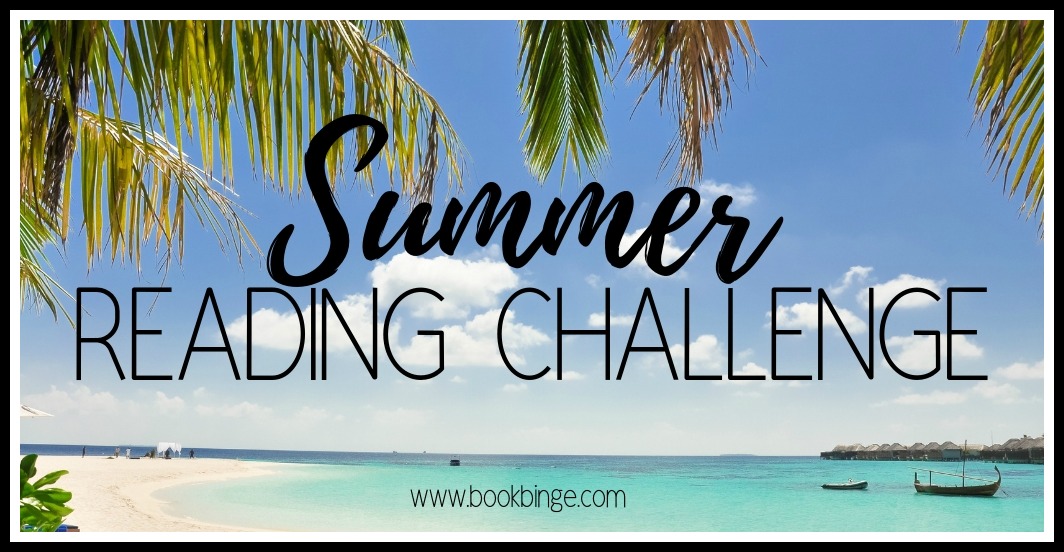 Summer is almost upon us and that means it’s time for another Summer Reading Challenge for us admins at Book Binge. Last year’s challenge was such a success we’re planning on making it an annual thing. Once a year, we get to choose five books for the others on the team to read. It started last year when Casee, Holly, and I were talking about books and we’re bringing the challenge back.

This year, we will each read 7 books chosen by the other two. Each of us will choose 3 books for the others to read, along with a joint pick. We’d like to invite all of you to read with us. Pick a book (or 5..or 7) from our list and read along in June, July and August. Or, if you’ve read all of these, check out the Master List of recommendations from your favorite authors, readers and industry professionals and choose five books from there.

Holly: I decided to mix things up for Casee this year. I’ve been telling her for months to read the Molly Harper and K.F. Breene books, but she’s been ignoring me. This way I know she’ll finally listen to me. Then she’ll have to tell me I’m right (my favorite thing).

Rowena: I chose the same three books for both Casee and Holly because they are books that I want them both to read so that we can talk about them. I think they would both enjoy them but they need a little kick in the ass to get them read so here’s your kick in the ass, Casee. LOL.

Holly & Rowena: Casee doesn’t read a lot of historicals, and we want to change that. Both of us are loving this new Lorraine Heath series, so we chose book 1.

Casee: I decided to go way off the rails this summer because of the clusterfuck that was last summer. Holly requires outside the box thinking. So I thought way, wayyyy outside the box. Holly tried to get me to listen to a sci-fi earlier this month. While they’re not my cuppa anymore, I was inspired. Thus, Hope’s Folly by Linnea Sinclair. I read it back in the day and loved it. I’m hoping Holly will enjoy it too. As for Marry Me by Jo Goodman? Well, I will always adore Jo Goodman. This book is also outside the box, which I think Holly will appreciate. I also threw in the Meredith Duran because it’s a historical and I always strike out with contemps and paranormals. If she doesn’t like any of these books, I’m throwing in the towel.

Rowena: Like Casee, Holly needs a kick in the ass to get these books read. I know that Holly would enjoy the books if she would give them a chance so here’s to me, making Holly finally buckle down and read all the Lauren Layne things. evil cackle

Casee & Rowena: It’s always hard to choose books for Holly because I think she reads more than we do but we also don’t read a lot of the same stuff. We both read and LOVED Long Shot so we’re hoping that Holly does too.

Casee: Rowena enjoys all genres, so it wasn’t too hard to pick her books. I know that she enjoys a good paranormal, so I gave her two. One of my favorite paranormal series is the Sea Haven series by Christine Feehan. Sea Haven consists of The Drake Sisters and Sisters of the Heart. I decided with Water Bound which is the first book in Sisters of the Heart series. You can’t go wrong with a Prakenskii (the hero). When looking thorough GoodReads, I saw Blood Magic on my “Read” shelf and remember liking it a lot. Last, but not least is The Spymaster’s Lady by Joanna Bourne. I loved it when I read it.

Holly: Getting Rowena to read outside her comfort zone is difficult. Like last year, I chose books this year that I know she’ll love, but would never have picked up on her own. The Iron Duke is one of the best books I’ve ever read, and I know she’s going to love it. I forced her to read Here There Be Monsters years ago, and I know she liked it. Clearly she isn’t going to continue the series unless I force her to. The Kingpin of Camelot is hilarious and fun, and I know she’ll love Midas as much as I do. I chose How to Date Your Dragon for both Casee and Rowena. Rowena doesn’t read light paranormals very often, but I know she’s going to love this one.

Casee & Holly: Written in Red by Anne Bishop is the first book in The Others series and this series is seriously like no other. It may be a little bit outside Rowena’s purview, but we think she will love it as much as we do. If she doesn’t, we might have to seriously start reconsidering our life choices where she is concerned.