I can’t believe how fast this school year has flown by. Of course while it’s happening it doesn’t seem like it’s going by quickly but now that it’s the end – wow. My oldest daughter’s last day of 7th grade is on Thursday – how the hell did that happen? Seriously, wasn’t I just posting pictures of the first day of school and wondering how she’d grown so fast? It’s crazy. My youngest is quite put out by the fact that her sister’s last day is this week because she doesn’t get out of school until the 10th of June. I can just imagine how fun it will be to try and get her up every morning when her sister gets to sleep. Ug. lol

Diet and exercise – I was bad this week and didn’t do any exercise routine at all. I did, however, go on a 90 minute hike on Saturday morning with my youngest and not only was it great exercise but it was fun and a beautiful day to boot. Here are a couple of shots I got with my phone. There was a lovely small waterfall at the top of the trail and I thought I had gotten a picture of it but apparently I had accidentally switched my phone to video mode and I got a jumble of nothing instead. 🙂
I did lose 1.8 pounds this week which brings my total lost to 4 pounds. Slow and steady wins the race, right? Yeah, I just keep telling myself that. 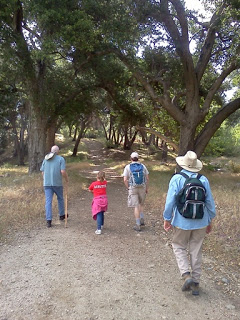 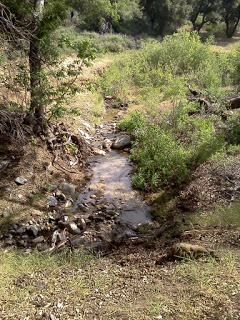 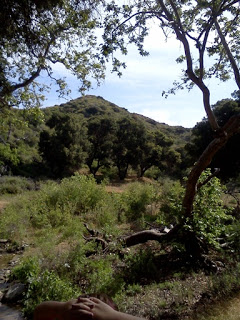 I read a lot this past week. Mostly because I was sick for 2 days and when I’m home, in bed, with what felt like the Bubonic plague, there’s nothing to do but read. I hated being sick but it was nice to have quiet alone time. It’s amazing how much I can read when the kids aren’t around. lol I also read quite a few shorter books so it seemed like I read more. 🙂

First up was Mate Hunt by Amber Kell. This is book one in the Dragonmen series. It was the story of Joriah who is sent to a mate hunt on the dragonworld so that he can A)find a mate and B)get away from his brother who supposedly wants him dead. Joriah ends up finding not one but 2 mates. This story had some good potential but it was so short the world and emotions weren’t explored fully. 3.25 out of 5

Next up was The Clearing by Heather Davis. I read YA novels that often but I got this one at RT and I’m so glad I did. It was the story of Amy who goes to live with her great aunt in a small town after she has some abuse issues with her ex-boyfriend. She ends up meeting Henry in a clearing near her aunts house and they become friends and start to fall in love. But Henry’s not exactly in the 21st century. On Henry’s side of the clearing it’s still 1944. The story tells of their friendship, their sweet romance and the difficult choices that have to be made by both Amy and Henry. It was a really great book though I have to admit the last chapter threw me a bit. I understood why the author wrote it the way she did…except for one aspect of it that I couldn’t quite wrap my head around and thought about for days afterward. A really good read. 4 out of 5

My next read was Dark Enchantment by Anya Bast. This is book 3 in the Dark Magick series and it was pretty darned good. The story was about Charlotte, a human accountant, and Kieran who is from the Seelie court. Kieran bonds with Charlotte to get her to Piefferburg so that the dark fae can delve into the memories of her ancestors. A good story just like the first two in the series. You can read my review on The Book Binge here. 4 out of 5

After that I picked up Lord Langley is Back in Town by Elizabeth Boyle. This is the story of Lord Langley who is back in town. lol Kidding, ok, he IS back in town but he’s trying to clear his name and falling in love at the same time. I’ll post my review on Wednesday.

A Lot Like Love by Julie James was my next read and it was a good one. The story of an FBI agent who gets roped into playing boyfriend to a rich woman so that he can get the bad guy and she can get her brother out of prison. It was a great story and I really liked it. It had James’s humor as well as some great romantic moments. 4 out of 5

Love Ahead, Expect Delays by Astrid Amara was my next read. This was the story of a man who has to drive his grandmothers Geo Spectrum to her from Seattle to Colorado at Hanukah. He invites his boyfriend who’s not thrilled about the Geo but agrees to go. It was a story of everything that can go wrong, will go wrong which normally isn’t my favorite thing to read but Amara really did a great job of working Austin and Zach’s relationship issues into the story along with great humor. 4 out of 5

Next was Ice Cream on the Side by Wren Boudreau. Architect Dylan meets Michael Gilmore and start a relationship but there are some strange things happening. First a dead body shows up…and it’s a guy that Dylan dated. Then another friend of Dylan’s dies and Michael almost gets killed. Now they just have to figure out who wants everyone out of Dylan’s life. A cute story. 3.75 out of 5

Anchor by Jorrie Spencer was next. I bought this one not realizing that there were a few other stories in front of it in the series but once I started reading I didn’t feel like I needed to read those others to know what was going on. Yes, there were a few times where previous knowledge of the town, etc. would have helped but not too much. This was the story Mala who had been having stories about wolves since she was a child. She always thought that they were just dreams but then she finds out that everything was real. She ends up in Wolf Town trying to help find an evil wolf shifter and falling in love with the alpha, Angus. I liked the dream portion of this story as well as the interactions with the different people that Mala had but the I felt the romance part of the story was definitely on the light side. 3.25 out of 5

My Tracy’s TBR Challenge read for the week was The Perfect Stranger by Anne Gracie. Yes, I’m slowly making my way through this series – just 1 more book to go. This was Faith’s story and I really liked it. It was definitely on the darker side compared to the previous books but really good. Faith had eloped with a man and married him but after a month finds out that the wedding was a sham and that he was already married with 5 children! She runs from him but ends up pretty much living on the streets until she runs into an ex-soldier. The ex-soldier, Nick, says he’ll marry Faith in name only but once they’re married she’ll go straight back to England (they’re in France) so that he can complete his journey. Faith agrees but then reneges and ends up traveling with Nick and of course, eventually falling in love. It was a sweet story and quite emotional at times. The resolution to Nick’s issues was a bit out there for my liking but the book was good overall. 4 out of 5

Pack Rogue by Crissy Smith is a novella that is book 4 in the Were Chronicles series. This was the meeting and mating of Kiley – a rogue/were/P.I. – and a visiting Alpha, Austin. The series itself deals with the were’s possibly coming out to the humans but the stories are SO short that we really never get total resolution at the end of the books. The romances are short and sweet but the rest of the story needs more too it imho. 3 out of 5

Last on the list was St. Nacho’s by Z.A. Maxfield. This was a great book about Cooper is trying to outrace his demons by hitting the road on his motorcycle – which he’s been doing for three years. He stops in Santo Ignacio, California and ends up working for his room and board…and falling in love with Shawn, the deaf busboy at Nacho’s. But his past calls and he has to head back to help a friend and ex-lover deal with similar demons. It was great read and I can’t wait to read the next in the series. Too bad I have books 1 & 3 only. lol I’ll get #2 soon and work on that. 4 out of 5

My Book Binge reviews that posted this past week:
Hidden Embers by Tessa Adams
Devil’s Own by Veronica Wolff
Dark Enchantment by Anya Bast