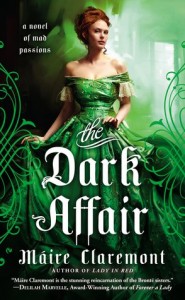 The Victorian era was full of majestic beauty and scandalous secrets—a time when corsets were the least of a woman’s restrictions, and men could kill or be killed in the name of honor...

Lord Ian Blake has returned from India a broken man. Years ago, he pledged to Lady Eva Carin—his childhood companion and first love—that he would bring her husband back alive. His failure haunts him. But even his jaded soul can’t anticipate the shocking sight of beautiful, independent Eva confined in a madhouse.

Viscount Ian Blake returns to England after three years in India. He is anxious to return to the home he grew up in as he’s not sure what his welcome will be by his childhood friend Eva. When he gets to the house, however, what he finds is quite shocking. He finds Eva gone, her son dead and her dead husbands brother as the Lord of the Manor. Ian finally gets out of Thomas (the current Lord) that Eva was put into an asylum because she went mad after the deaths of her husband and son in such short succession. Ian is determined to get Eva out of the mad house and goes there acting as if he is Thomas.

Ian manages to get Eva out (and almost get her friend Mary as well but that didn’t work out) and he heads off to try and keep Eva away from the asylum thugs that are looking for her to take her back and to keep her away from the Laudanum that she’s become addicted to.

Eva wants nothing but to forget. She hates herself for killing her son and feels she deserves to be in the mad house. Ian tries to make her see that it’s not her fault but he has guilt aplenty about Eva’s dead husband, Hamilton, who was also Ian’s best friend. Ian sets out with a friend of his to prove that Eva isn’t crazy and that will get her out from under Thomas’s thumb. He tries to hide his love for Eva along the way but can’t quite manage it when she’s in such close proximity at all times.

This book started off really good. I was completely into Ian finding Eva and what he needed to do to get Eva out of the asylum. Even not long after that when they stopped for the night and they had it out about Eva’s Laudanum usage and she almost got herself killed trying to get a fix. Shortly after that the book went downhill for me.

Yes, the book was dark and gothic but the guilt that both Eva and Ian carried with them brought the story down to an almost depressing level. I was unimpressed with the constant inner fighting they both did with themselves and the slow pace that the book took on because of it. During the middle of the book I almost put it down completely but kept reading. I’m not sure I’m happy I did. Yes, everyone was happy in the end and it all worked out for everyone (almost too smoothly) but the getting to that point, for me, wasn’t worth the time spent.

I’m giving this story a slightly higher grade than I normally would just for the first part of the book, Mary’s part (which was small but awesome) and Ian’s friend’s involvement as those parts saved the book for me.  I think this is one that you have to read in order to decide on for yourself.  I looked at Goodreads and apparently, I’m in the minority on my rating so if you read it let me know what you think.