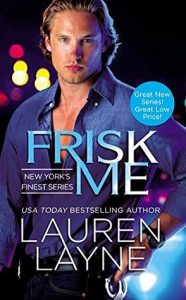 Officer Luc Moretti had no idea that his dive into the East River would have him drowning in a media frenzy. No matter how many times he tells reporters he was just doing his job, they're determined to make him into NYC's newest hero. Coming from a long line of NYPD's finest, Luc knows that being a cop has nothing to do with headlines and viral videos, and he's more than ready to get back to life away from the cameras—until he meets the gorgeous but jaded journalist assigned to film a TV special on him.

Ava Sims may be the only woman in NYC who isn't in love with Officer Moretti. That's why she's going after the real story—to find out about the man behind the badge. Ava's determined to keep things strictly professional, but the more time she spends around Luc, even she has to admit there's something about a man in uniform . . . and she can't wait to get him out of his.

I guess it had to happen sooner or later. I DNF’d my first Lauren Layne book and I’m still pretty surprised about it. If you know me then you know of my love of all things Lauren Layne. I adored her Oxford, Sex, Love & Stilettos and Wedding Belles series. I am enjoying her Love Unexpectedly series. There hasn’t been a book of hers that I absolutely hated (I have hated some character antics and thought processes but I haven’t hated any books) so imagine my surprise when I just couldn’t get into this book.

This book follows Luc Moretti, a New York Police Officer who is being praised for being a hero and Ava Sims, the reporter who is covering his story. Ava and Luc do not like each other and Ava’s attitude pissed me off too much for me to continue on. The way that she yelled at Luc, who was giving her a parking ticket because she was parked illegally on a public street pissed me off because she was yelling that he was violating her freedom of speech. WTF does that even mean? She was working so she’s above the law now? I’m sorry but…

Don’t even get me started when we get to the present time and she sees Luc again for the first time in three years. On top of Ava’s attitude, she’s a reporter and I have a love and hate relationship with reporter heroines so after some convincing from my besties, I stepped away from this one. I’m sure she got better as the book wore on but I just couldn’t do it so that was my first DNF. 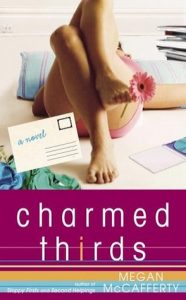 Things are looking up for Jessica Darling. She has finally left her New Jersey hometown/hellhole for Columbia University in New York City; she's more into her boyfriend, Marcus Flutie, than ever (so what if he's at a Buddhist college in California?); and she's making new friends who just might qualify as stand-ins for her beloved best friend, Hope.

But Jessica soon realizes that her bliss might not last. She lands an internship at a snarky Brooklyn-based magazine, but will she fit in with the uberhip staff (and will she even want to)? As she and Marcus hit the rocks, will she end up falling for her GOPunk, neoconservative RA . . . or the hot (and married!) Spanish grad student she's assisting on a summer project . . . or the oh-so-sensitive emo boy down the hall? Will she even make it through college now that her parents have cut her off financially? And what do the cryptic one-word postcards from Marcus really mean?

With hilarious insight, the hyperobservant Jessica Darling struggles through her college years--and the summers in between--while maintaining her usual mix of wit, cynicism, and candor.

I’ve been wanting to read Charmed Thirds since I finished Second Helpings…the only problem with that is that I read Second Helpings years ago and I don’t know if it’s my old age but Jessica Darling was exhausting to read about and I was disconnected from everyone (including Marcus and I loved him before) so after a while of not really caring what was going on and wanting Jessica to take a breath, I just stopped reading this. It just didn’t hold my interest so I moved on. 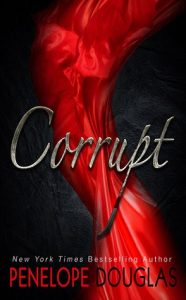 I was told that dreams were our heart’s desires. My nightmares, however, became my obsession.

His name is Michael Crist.

My boyfriend’s older brother is like that scary movie that you peek through your hand to watch. He is handsome, strong, and completely terrifying. The star of his college’s basketball team and now gone pro, he’s more concerned with the dirt on his shoe than me.

But I noticed him.

I saw him. I heard him. The things that he did, and the deeds that he hid…For years, I bit my nails, unable to look away.

Now, I’ve graduated high school and moved on to college, but I haven’t stopped watching Michael. He’s bad, and the dirt I’ve seen isn’t content to stay in my head anymore.

Because he’s finally noticed me.

Her name is Erika Fane, but everyone calls her Rika.

My brother’s girlfriend grew up hanging around my house and is always at our dinner table. She looks down when I enter a room and stills when I am close. I can always feel the fear rolling off of her, and while I haven’t had her body, I know that I have her mind. That’s all I really want anyway.

Until my brother leaves for the military, and I find Rika alone at college.

The opportunity is too good to be true as well as the timing. Because you see, three years ago she put a few of my high school friends in prison, and now they’re out.

We’ve waited. We’ve been patient. And now every last one of her nightmares will come true.

***Corrupt can be read as a stand-alone. No cliffhanger.

Corrupt was a book that was brought to my attention by well, everyone. I’ve been seeing such good things about this author and this book in particular that I bought it and prepared myself for an interesting read. There’s a darkness to this book and to the hero that I just could not get behind. I tried three different times to get past what the hero and his friends were doing, to get past what they blamed the heroine for and though I was told that not all is what it seems, I just couldn’t do it. I couldn’t finish it and it was messing with my reading mojo so I stepped away from this one. Who knows if I’ll pick it back up later, I just know that I can’t do it now.

Have you DNF’d any books lately? Share your DNF stories with us. Which books should we steer clear from? Help a sister out!

8 responses to “DNF Round Up: Frisk Me, Charmed Thirds & Corrupt”