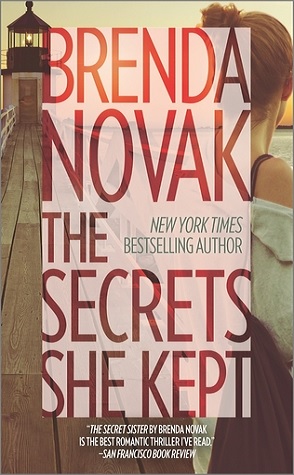 The rich and powerful Josephine Lazarow, matriarch of Fairham Island, is dead. The police say it's suicide, but Keith, her estranged son, doesn't believe it.

Keith bears scars—both physical and emotional—from his childhood, but he's worked hard to overcome the past. After walking away from his mother and her controlling ways five years ago, he's built a new life in LA. He's also accumulated a fortune of his own. But as soon as he learns of his mother's death, he returns to Fairham. He feels he owes it to his grandfather to put the family empire together again—and he's determined to find his mother's killer.

Problem is…coming home to Fairham puts him back in contact with Nancy Dellinger, the woman he hurt so badly when he left before. And digging that deep into his mother's final days and hours entails a very real risk.

Because the person who killed her could be someone he loves…

Keith was an unspeakable ass in The Secret Sister, which was book one in this series. He was a drug addict and he took advantage of everyone he could, including Nancy Dellinger. On one hand, I want to forgive him because I know that being an addict is a real problem. OTOH, I can’t forgive him for all the people he hurt. I also can’t believe that Nancy fell in love with him. Nor can I believe that she’s been pining after him for five years.

Keith left Fairham Island five years ago and has been estranged with his mother Josephine since he left. He has kept in touch with both his sisters. He’s cleaned himself up and made a success of himself in real estate. A call in the middle of the night changes everything. His mother is dead. An apparent suicide. Keith doesn’t believe for one moment that the mighty Josephine Lazarow would kill herself and he flies to Fairham Island determined to prove it.

In the meantime, Keith is stirring up a hornets nest by asking questions about everything to everyone on the island regarding Josephine. He doesn’t like the answers he’s getting either. In the end, it wasn’t surprising to know who the killer was. It was all tied up in a nice neat little bow. The end was a little to neat for me, especially Keith and Nancy’s relationship. It was just too pat for me. It doesn’t happen that easily, not in books. There was plenty of angst on Nancy’s part, but anytime Keith came calling, he got what he wanted. It was maddening.

I enjoyed The Secret Sister much more.