Eloisa James has written some fantastic historical romances and I’m always excited when she comes out with new stuff. After reading the summary for this book, I knew that I wanted to read it. I mean, who wouldn’t want to read a romance where the runaway bride falls in love with someone, not her fiance? It sounds so good!

I was super thrilled when our friends at Avon were very interested in being this week’s Sunday Spotlight. 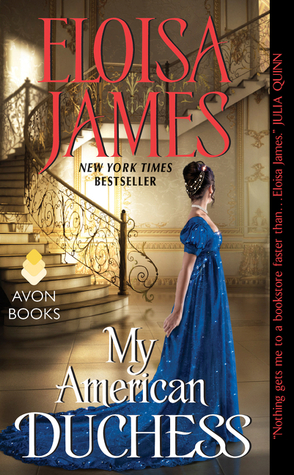 My American Duchess by Eloisa James
Releases on January 26, 2016 by Avon

The arrogant Duke of Trent intends to marry a well-bred Englishwoman. The last woman he would ever consider marrying is the adventuresome Merry Pelford— an American heiress who has infamously jilted two fiancés.

But after one provocative encounter with the captivating Merry, Trent desires her more than any woman he has ever met. He is determined to have her as his wife, no matter what it takes. And Trent is a man who always gets what he wants.

The problem is, Merry is already betrothed, and the former runaway bride has vowed to make it all the way to the altar. As honor clashes with irresistible passion, Trent realizes the stakes are higher than anyone could have imagined. In his battle to save Merry and win her heart, one thing becomes clear:

All is fair in love and war.

Ooh, we get some kissing action in this excerpt.

He had promised himself he would be gentle when he kissed her. He was wrong.

It was a greedy kiss. He had never realized that a lady’s lips could be as voluptuous as a courtesan’s—but that the addition of surprise and innocence would make it a far headier experience than he had ever experienced.

To this point, Trent hadn’t particularly enjoyed kissing. It was too intimate. He’d never been selfish about giving pleasure, as he enjoyed bodily intimacy. All the same, he didn’t care for kissing.

When Merry started kissing him back, the shock of it sent a hum down his limbs that brought with it a strange feeling, as if the world were shaking around them.

One of her hands came around his neck and buried itself in his hair. Her mouth had been sweet, but now it was silk and fire. Her innocence was still there, but alongside it, a searing urgency.

Trent lost himself. Their tongues danced together and he felt a shudder go through Merry’s body. She made a whimpering sound in the back of her throat, and desire exploded down his spine.

It wasn’t until he became aware that one of his hands had settled on her thigh, and that certain parts of his body had taken on an ungentlemanly life of their own, that he regained a measure of sanity.

A man could get lost in those eyes. Desire shimmered between them like a haze on a hot day in August.
Would she be outraged? Surprised?

“I loathe myself,” she mumbled, closing her eyes in anguish.

“It wasn’t a bad kiss.” Trent’s voice had a rasp that he’d never heard in it before.

Her eyes opened again. “You have the oddest sense of humor,” she said, frowning.

“Did you enjoy the kiss?”

She caught back whatever she was about to say.

“I am a despicable person,” she said, her voice ragged.

He suppressed a smile. “I strongly disagree.”

Descriptions and details began tumbling out of her—about Bertie, who used to kiss her on a sofa (if Trent ever met him, he’d have to kill him for that), about Dermot, about Cedric . . . In short, the whole sorry saga of Merry’s romantic life thus far.

As Merry recounted her supposed sins, Trent cupped her face in his hands and lowered his lips to hers, so close that their noses brushed. She went silent. “You never kissed Cedric the way you just kissed me,” he stated.

Her eyes didn’t fail him. He could see the truth in them. “No,” she said with a little gasp. “No—that is to say, I won’t discuss it. This mustn’t ever happen again, Your Grace. I’m—”

He took her mouth in a thirsty, deep kiss.

Before now, first, second, and third kisses had been merely signposts on the road to bed. His mistresses had all been courtesans, refined women who chose their lovers and enjoyed his company as much as he did theirs.

Kissing Merry was no signpost. It was like making love, something he could do all night. She was everything he’d ever wanted in a woman, and nothing he’d ever thought to find in a lady.

Oh wow, that was a great excerpt. A really great scene. There’s so much to look forward to and I can’t wait for this book to come out. I just know that I’m going to love it!

Giveaway: We’re giving one lucky winner their choice of one of our Sunday Spotlight books. Use the Rafflecopter widget below to enter for one of January’s features. 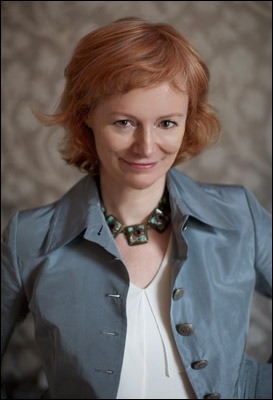 New York Times bestselling author Eloisa James writes historical romances for HarperCollins Publishers. Her novels have been published to great acclaim. A reviewer from USA Today wrote of Eloisa’s very first book that she “found herself devouring the book like a dieter with a Hershey bar”; later People Magazine raved that “romance writing does not get much better than this.” Her novels have repeatedly received starred reviews from Publishers’ Weekly and Library Journal and regularly appear on the best-seller lists. After being a finalist for a RITA—the top award in the genre of romance fiction awarded by the Romance Writers of America—over ten times, she won in 2013.

10 responses to “Sunday Spotlight: My American Duchess by Eloisa James”