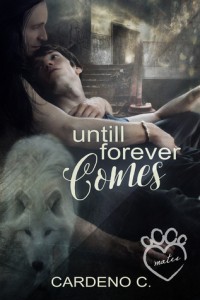 Tracy’s review of Until Forever Comes (Mates #2) by Cardeno C.

Plagued by pain and weakness all his life, Ethan Abbatt is a wolf shifter who can’t shift. Hoping to find an honorable death by joining his pack mates in a vampire attack, Ethan instead learns two things: draining his blood releases his pain and his wolf, and he has a true mate—a vampire named Miguel.

Over four centuries old, strong, powerful, and vicious, Miguel Rodriguez walks through life as a shadow, without happiness or affection. When a young shifter tells Miguel they’re true mates, destined to be together, Miguel sends him away. But Ethan is persistent and being with him comes so naturally that Miguel can’t resist for long. Their challenge is staying alive so they can be together until forever comes.

Ethan is a shifter who can’t shift. He’s a small man and is not well thought of in his pack. He tries to give himself an honorable death by going with members of his pack to kill some vampires that have recently moved into the area. He almost does die but is saved at the last minute by one of the vampires for unknown reasons. At that time Ethan has lost a ton of blood but suddenly shifts into his wolf form.

Ethan knows that the vampire that let him live, Miguel, is his true mate. He goes back to town and tries to explain things to him but Miguel is having none of it. Eventually Ethan leaves home and moves into town to be with Miguel. Miguel is attracted to Ethan as well but vampires and shifters normally loathe each other. Ethan tries to explain to Miguel that they’re true mates but Miguel just thinks they’ll have some fun in bed and then go their separate ways. The longer the pair are together the more Miguel sees that Ethan isn’t someone he wants out of his life but other vampires and other shifters start to get involved to tear them apart and that causes bunches of trouble.

The story in this one had a good premise and had a pretty good start but what began as a sweet story soon didn’t end up working for me.

First of all Ethan is at deaths door and about to be eviscerated by a vampire in a nasty alley when he sees Miguel. Knowing that he’s his true mate actually turns Ethan on and when Miguel actually looks him in the eye Ethan spontaneously climaxes. WTF? That was just really weird to me. I can understand getting a cockstand but coming when he looks at you? Come on, I know it’s paranormal but that’s just weird.

Despite that less than auspicious beginning the story between Miguel and Ethan became very sweet. I liked them together and Miguel’s growing possessiveness and protectiveness toward Ethan wasn’t too annoying. I liked that they got that way about each other. Unfortunately there wasn’t much more to the story than that. The majority of the book was Ethan and Miguel spending their days in a dark warehouse room on a mattress having sex – and we got to read about every time. It got old really quickly and besides people trying to separate them at one point, nothing much else happened. I liked Cardeno C.’s writing so I read to the end but the second part of the book was sadly lacking imho.

My other issue with the book was the way that Ethan and his family spoke. It was uneducated hick and became hard to read very quickly. They didn’t seem uneducated but that’s the way they spoke. I couldn’t get a handle on what year it was or the setting – I thought that might explain things if it was, say, the 60’s or 70’s in the Ozark’s or something like that. The first book in the series didn’t have the characters speaking that way and I’m hoping book three won’t be like that either. Cross fingers.

This title is available from The Romance Authors. You can buy it here or here in e-format. This book was provided by the author in exchange for an honest review.