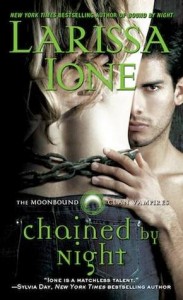 THE FUTURE OF HIS TRIBE
Leader of the vampire clan MoonBound, Hunter will do what he must to save his people from extinction—or worse, a torturous eternity as vampire slaves and subjects of human experimentation. To keep his enemies at bay, he has agreed to mate a rival clan leader’s daughter in return for peace between the clans and an ally in the looming war with the humans.

THE LOVER OF HIS SOUL
But survival comes at a price. First, Hunter must break an ancient curse by successfully negotiating three deadly tests. Then he must resist the searing passions of the gorgeous vampire warrior he despises but is bound to mate. Will Hunter stay true to his word? Or will he risk everything for the woman he really loves: the vampire seductress’s identical twin sister?

In book one of this series we learned that a midwife had been taken by a company by the name of Daedalus. The midwife was in the care of the Moonbound Clan at the time but she actually belonged to the ShadowSpawn Clan. ShadowSpawn vampires are evil, nasty people and when they kidnapped Nicole, Riker and another vamp named Lucy, the only way to stop a war from occurring was for the leader of the Moonbound Clan, Hunter, to agree to marry the ShadowSpawn leaders oldest daughter, Rasha.

Rasha is a warrior but a complete bitch of a woman. She makes Hunter’s skin crawl and the thought of mating with her makes him sick to his stomach. Her twin sister Aylin, however, makes his blood sing and the more he gets to know her the more he likes her.

When Hunter tells Rasha that they need to go on a quest so that a demon won’t take their firstborn child Rasha refuses. Luckily for Hunter Aylin agrees to take her place and they head off on the quest. Aylin proves to be an incredibly strong woman despite a handicap she has and Hunter starts to fall in love. He wants nothing more than to be with Aylin but as he made an agreement to marry Rasha, he can’t go back on that. It tortures both of them but they find there is no solution to the problem.

Another great book in the Moonbound Clan series. This book was SO very different from the first book in the series but still oh, so good. I loved the expansion of the world that Ione created to include a different dimension. The situation that Hunter and Aylin find themselves in puts them together and has them growing closer in a life or death situation. It may have been extreme circumstances that put them together but they ended up seeing the real people behind the outer skin.

Once they were back in the clan my heart broke for them. Ione did a great job of showing us how tortured they were to be apart and to know that Rasha was coming between them was horrible. Rasha was such shrew I just didn’t like her at all. She really tried to protect Aylin at times but treated her like crap at the same time. When certain information came to light about the twins I disliked her even more.

I have to say that I was a little confused as to why the demon would take Hunter’s firstborn with Rasha when he had had a child previously. It did state that the baby had died but it didn’t say how old the child was. Wouldn’t that have been Hunter’s first born? Wouldn’t the demon have taken that one? I was confused.

Despite that issue I really liked the book. It was exciting in so many ways and I couldn’t put it down until I was done. I can’t wait for the next book in the series and I’m looking forward to getting to know the Moonbound Clan a little better.

This title is available from Pocket Books. You can buy it here or here in e-format. This title was provided by the publisher in exchange for an honest review.