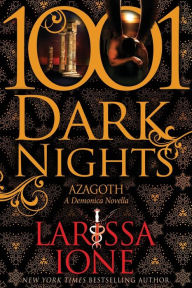 Even in the fathomless depths of the underworld and the bleak chambers of a damaged heart, the bonds of love can heal...or destroy. He holds the ability to annihilate souls in the palm of his hand. He commands the respect of the most dangerous of demons and the most powerful of angels. He can seduce and dominate any female he wants with a mere look. But for all Azagoth's power, he's bound by shackles of his own making, and only an angel with a secret holds the key to his release. She's an angel with the extraordinary ability to travel through time and space. An angel with a tormented past she can't escape. And when Lilliana is sent to Azagoth's underworld realm, she finds that her past isn't all she can't escape. For the irresistibly sexy fallen angel known as Azagoth is also known as the Grim Reaper, and when he claims a soul, it's forever...

Azgoth is Larissa Ione’s novella that was published in 1001 Dark Nights, Bundle 2. I usually don’t read novellas because they are just too short and I don’t believe the author has enough pages to develop a story, let alone a character. Supposedly this one clocked in longer than your usual novella and I really like the Demonica series so I gave it a shot. I was right. There just aren’t enough pages.

Azagoth is literally the Grim Reaper. Once an angel with emphatic abilities, he couldn’t take the emotion of every person he came into contact with. As his power grew, so did his abilities and he didn’t even have to come into contact with anyone. So he Fell. Very, very far. As the Grim Reaper, he decides where the souls go in Hell. He also has sex with a lot of angels and it’s not until you learn his back story that you realize why.

After awhile, Azagoth decides he’s done serving as Heaven’s stud and he wants an angel mate instead. Obviously the angels can’t make him do much of anything, but they want to make him happy. So they find a disgraced angel for him. Not a Fallen Angel, but an angel that is in big trouble. Lilliana is given a choice to mate Azagoth or get her powers taken away. Her powers are what got her in trouble in the first place, but she still doesn’t want to lose them.

Azagoth can tell she’s going to be trouble the moment he lays eyes on her. He likes it. She doesn’t. She already has a plan to escape without losing her power. This is one of the times more explanation would have been nice. As a time traveling angel, I understood what she needed and how she was going to escape, but how was she going to escape punishment? You learn later in the book, but it’s only explained in half of a page.

I enjoyed parts of this book and parts I didn’t. I just can’t get behind novellas.

One response to “Review: Azagoth by Larissa Ione”