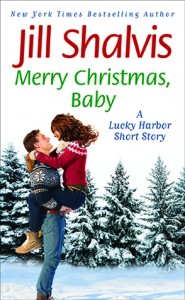 Reviewer: Tracy
Merry Christmas, Baby by Jill Shalvis
Series: Lucky Harbor #12.5
Also in this series: Simply Irresistible, Under the Mistletoe (Lucky Harbor, #6.5), Forever and a Day, Once in a Lifetime, It's In His Kiss, He's So Fine, One in a Million, At Last (Lucky Harbor, #5)
Publisher: Forever Yours
Publication Date: December 2, 2014
Format: eARC
Add It: Goodreads
Amazon | Barnes & Noble | The Ripped Bodice | Google Play Books

Wild child Chloe Thompson can’t believe how much things have changed. She still can’t get enough of her sexy husband Sawyer, but he seems to prefer working to thinking about impending fatherhood. So tonight, a very pregnant Chloe is escaping her troubles at the town Christmas party.

Sheriff Sawyer Thompson hopes surprising Chloe at the party will give him a chance to set things right. But as the snow begins to fall and the wind rages, he wonders whether he can make it back in time. While mother nature conspires to keep Sawyer and Chloe apart, an unexpected arrival will require them to kiss and make up . . . and ring in the happiest holiday Lucky Harbor has ever seen.

It’s been 5 years since Chloe and Sawyer fell in love and got married. Now she’s 8 1/2 months pregnant and Sawyer if off on yet another DEA assignment.  The pair haven’t exactly been speaking to each other and when they do they argue about his jobs with the DEA.  She also has been sniping at Sawyer a lot because of pregnancy hormones.  The fact is she’s scared out of her mind to be a parent and she feels guilty that she’s put Sawyer in position of parenthood when he doesn’t really want to be there. Now Sawyer has gone off on yet another DEA job and Chloe is determined to get to the town Christmas party, even though everyone she knows tries to keep her home to rest.  Life has a way of throwing curve balls, however, and soon Chloe discovers that A) she’ll be getting an early Christmas present and B) Sawyer won’t stop loving her – ever.

This was a short but very sweet story about Chloe and Sawyer who we read about in Head Over Heels.  It was a kind of day-in-the-life type story and showed us that everyone has their ups and downs but that they never stop loving each other – no matter what.  There’s nothing that Chloe and Sawyer can’t get through – even if they lose their way for a while.

If you love the Lucky Harbor series you won’t want to miss this short addition.