Today we have Jodi Thomas here to discuss her upcoming release, A Place Called Harmony.

Once in a while in my career of forty books, there comes a story I know I have to write.  It waits like an impatient child in the back of my mind for its time to shine.  A PLACE CALLED HARMONY was one of those stories.  As I moved through the Harmony series, getting to know the people of Harmony, Texas, better with each book I knew that someday I’d tell the beginning of their town.  From the day I started writing the characters came through clear.  I had to find men strong enough to influence the generations of Mathesons, Trumans and McAllens.

Patrick McAllen had grown up on the gulf coast of Texas.  He had to run away to avoid his father’s wrath and shy little Annie agreed to go with him.

Captain Matheson didn’t even know his family was relocating to build a town where only a trading post stood.  When he got to his wife Daisy, he realized how much having him near meant to her and how dearly he needed his ever-growing family.

Clint Truman had been looking for a way to die since he’d lost his family.  Drunk and down on his luck, a sheriff offered him a choice.  Go to jail or head north to build a town.  Clint didn’t think much of the idea but when he met a woman half-dead from starvation and caring a newborn in her arms, he saw someone who needed him and he couldn’t turn away.

When Truman, Matheson and McAllen’s stories began to dance in my mind, I found myself staying up later every night to write more.  I love the way the three men interacted and the way all three loves storied grew.  I have a feeling that readers will be staying up a little later to read one more chapter.

Step into the beginning of a town called Harmony.  Ride along with me through the adventures and the love stories. 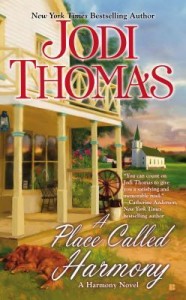 Jodi Thomas has captivated America with her novels set in the small town of Harmony, Texas. Now she tells the story of the three hard-luck men who first settled the town, a place where last chances and long-awaited dreams collide…

Desperate to escape his overbearing father, Patrick McAllen disappears with his bride, heading north to build a new town—discovering strength, honor and true love along the way.

After drinking away the grief from his family’s death, Clint Truman avoids jail by taking a job in North Texas and settling down with a woman he vows to protect but never love—until her quiet compassion slowly breaks his hardened heart wide open…

All Gillian Matheson has ever known is Army life, leaving his true love to be a part-time spouse. But when a wounded Gillian returns home to find her desperately fighting to save their marriage, he’s determined to become the husband she deserves.

Amidst storms, outlaws, and unwelcome relatives, the three couples band together to build a town—and form a bond that breathes life into the place that will forever be called Harmony.

A four-time RITA winner, Jodi currently serves as she Writer in Residence at West Texas A&M University in Canyon, Texas.

A Place Called Harmony releases October 7 and is available for pre-order at www.jodithomas.com.