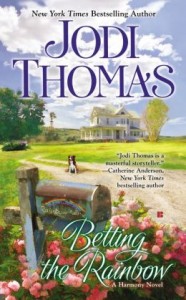 Sisters Abby and Dusti Delaney have spent their entire lives on Rainbow Lane, but they dream of something bigger. So when a poker tournament comes to town, Dusti is determined to win enough money to leave. Enlisting expert Kieron O’Brian to teach her the game, sparks begin to fly as they play their hands. But Kieron refuses to stand in the way of her dream, even if it means losing her forever...

After a year of traveling, Ronny Logan is settling into a home on Rainbow Lane, but that’s all the settling she’ll be doing. Ronny refuses to fall for anyone, regardless of the chemistry she has with her neighbor Austin Hawk. Yet something undeniable begins to grow between the two loners—if only they can let their barriers fall and open their hearts...

Dusti and Abby run the Delaney farm and do it well. They don’t make a ton of money but they keep it up. Unfortunately when they took it over both girls had to let their dreams go. Dusti is determined to get Abby that last semester in Nursing School and then maybe she’ll find a way to take some photography classes and be the professional photographer she’s always longed to be. When she hears about a local poker tournament being held at the Truman farm she’s excited. The winner of that tournament will get a $1,000 buy in to a big tournament in Las Vegas. She doesn’t know how to play poker, however, so asks her childhood friend, Kieran, to help her learn. They’d be playing against each other but Dusti is determined.

Kieran has always had it bad for Dusti but she’s always turned him down whenever he’s been in town and asked her out. It was just always a bad time for Dusti. She really does like Kieran a lot and loves being around him while he shows her the poker ropes. Though Kieran acts like he’s not too too interested he really is – even going as far as helping Dusti in a big, big way.

During all of this we have Reagan Truman running the apple farm and taking matters into her own hands with Noah. He’s been on the rodeo circuit for too long and she wants him back. She heads to Vegas to see him but when she does manage a glance at him he doesn’t see her. She ends up calling all over town but can’t find a hotel that he’s registered at. She heads home dejected. She then gets a surprise visitor that not only shocks her but changes her life and may have changed the way that she feels about Noah. When he does resurface he doesn’t like what she has to say but those words are the ones he needed to hear to get his shit together.

Another large portion of the book is also Ronny Logan. She’s back in Harmony from her world travels after a year but isn’t ready to face anyone. She has Mr. Carleon rent her a small cabin out on a lake and there she meets her neighbor – strong and silent Austin Hawk. Austin is recovering from an emotional and physical injury and while he’s crotchety and brooding, Ronny understands him. She doesn’t want to feel for anyone ever again but if she lets herself love him then it might be one of the best things she’s ever done.

Wow – another wonderful Harmony novel! This one had not one but three exciting romances in it and I loved getting back to the town and seeing all of it’s interesting inhabitants.

Dusti and Kieran’s story was sweet and touching and I adored Kieran to death. Their romance was very different but so good and emotional I just loved it. I also really liked Dusti and Abby’s relationship. The sister banter they had going, along with the food fight in their own home was awesome.

Reagan and Noah – I’m so glad we got to read about them in this novel. I honestly missed them in the last book but was so happy to have them back. This portion of their lives was heart wrenching but wonderful all in the same moment. I wanted to punch Noah (but Big did that for me, thank you Big) a time or two but he finally got his head on straight and I was SO happy that he learned from his mistakes.

Ronny and Austin were a strange pair but really perfect for each other, I must say. Ronny was still raw from Marty and not about to open her heart but when she did it was worth it. Austin tried to push Ronny away as he thought it was best for her but she didn’t give in to his brooding disposition and it actually made the relationship stronger as it proved to both of them that they could handle whatever came their way.

The book was really pretty great, I must say. I really love Harmony and all of its amazing citizens. I can’t wait to see what happens in Harmony next.