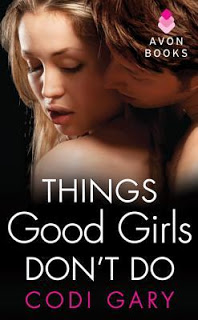 For Katie Conners, being a good girl just isn’t worth it anymore. It used to mean getting the life she always wanted. But that was before she got dumped and her ex got engaged to his rebound. So, after a bad day and one too many mojitos, Katie starts making a list of things a girl like her would never do, not in a million years . . .

As a tattoo artist with a monster motorcycle, Chase Trepasso isn’t the kind of guy you bring home to mom and dad.

And when he finds Katie’s list in a bar, he’s more than happy to help her check off a few items. Especially the ones on the naughtier side . . .

Katie’s more than tempted by Chase’s offer, as long as they keep things uncomplicated. But as they spend more time together, she may just wind up breaking the most important rule of all: Good girls don’t fall in love with bad boys.

It’s been 8 months since Katie’s live-in boyfriend cheated on her and moved out. She’s wanted to tell him how she really thought about him but never did. When she receives an invitation to his wedding (Jimmy and Katie were together for almost 7 years and he never proposed!!) she doesn’t want to be by herself. She heads off to the local bar and while sipping mojitos she decides that she needs to make a list of all the things she’s always been told NOT to do. You see Katie was raised by a wonderful mother but she was always holding Katie to a certain standard – one Katie lived up to. Katie however is a bit sick of “being good” or at least letting the townspeople walk all over her because she’s always too nice to tell them how she really feels.

Katie ends up with 10 things on her list but never plans on accomplishing any of them. That’s until Chase – the hunk who owns the local tattoo parlor – shows up and while just joking around takes the list. Katie’s mortified until Chase shows up at her house and offers to help her accomplish her list. Katie decides to take him up on it and what starts as a joke turns into something deeper for both of them. Unfortunately not everyone loves the “new Katie” and they certainly don’t care for Chase hanging around her as they feel he’s the one being the bad influence on Katie.

This was such a sweet book! I really loved both Katie and Chase and loved them together as well.

Chase was such an unknowingly sweet guy. He said he wasn’t romantic but he was always performing sweet gestures with Katie that he didn’t realize could be labeled romantic. He was kind, smart, humorous and not afraid to stand up to the townspeople. He did have some demons in his head telling him that he wasn’t good enough for Katie but he totally was and I loved it when he eventually realized that himself.

There was a part of the book having to do with Chase’s mother and I have to tell you that was one of the sweetest things I’ve ever read. Chase realizing how much his mother loved him even though he never knew before was just heartbreaking and wonderful at the same time. The way the whole thing was written was so well done.

I really liked this book a lot and definitely recommend it. It wasn’t too long and can be read in just a sitting. If you need a good book to pick up you should keep this one in mind.