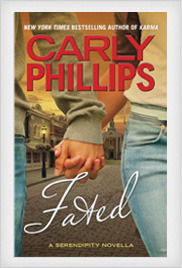 Kate Andews is the original rebound girl. But she has had enough and has vowed to never be someone’s second choice again. Unfortunately, her undeniably intense desire for Nick Mancini is testing her best laid plans because Kate has carried a torch for Nick since high school– but she’s always been permanently in the friend zone.

Lately, Nick has definitely noticed Kate. Unfortunately he can’t get her to take him seriously. He knows he’s made some stupid moves in the past but he’s determined to get Kate to act on their obvious and mutual attraction. However Kate’s stubborn and she’s been hurt before, which means Nick will have to pull out all the stops in order to convince her he’s not the same boy she used to know, and she’s not second best… she’s everything.

I’m really getting into this series and I’m really coming to love the people of Serendipity.  This short story follows Nick Mancini and Kate Andrews as they finally get to their happy ending.  Even though I thought this book was too short, I still enjoyed it.

If you read the other books in this series then you’ll remember Nick from Ethan and Faith’s story.  He was the contractor that helped Faith with her store but he’s also Faith’s high school sweetheart who tried to get at her again when she popped right back up in Serendipity, much to Ethan’s chagrin.  In this book, you’ll see that Nick has moved on from Faith…to her best friend Kate Andrews but Kate isn’t having anything to do with Nick.  No matter how many times Nick asks her out, she finds reasons to not go out with him.

Kate’s been burned before and she’ll be damned if she’ll be someone else’s second choice and with Nick, she’s the second choice because he just tried to rekindle his high school romance with her best friend.  As attracted as Kate is to Nick, she’s not going there.  She doesn’t want the hurt and humiliation that comes from that kind of relationship.

But Nick’s interest in her isn’t going away and he hasn’t stopped pursuing her so with a little help from the same best friend that Kate swears Nick still has feelings for, they get Kate to stick around and talk things out with Nick.

This was a cute story.  I was happy that Nick finally got his girl in the end because I remember liking him in Ethan and Faith’s book so it was good to see him again and even though I wanted a little more from this story, it was still a good read.  Everything happens so fast in this book but I didn’t think it was necessarily a bad thing considering, I knew about them from previous books.

After finishing Perfect Fit, I was itching for more Serendipity goodness and this was a great way to scratch that itch.  Now, if only I can stay patient for Erin’s book which comes out this year, woot!

This book is available from Berkley. You can buy it here in e-format. This book was provided by the publisher for an honest review.