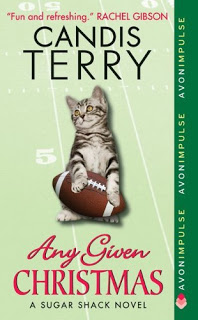 When an injury dashes NFL Quarterback Dean Silverthorne’s Super Bowl dreams, he heads back to Deer Lick, Montana with a chip on his wounded shoulder, more determined than ever to get back in the game. He loves his kooky family, but this trip home is going to be a very brief Christmas visit.
His game plan doesn’t include an instant attraction to Emma Hart, a feisty kindergarten teacher who seems to be the only person in Deer Lick not interested in the hometown hero. Or his dearly departed mom popping up with mistletoe in hand and meddling on the mind. Now Dean can’t help but wonder if there’s more to love than life between the goal posts.
Dean Silverthorne’s life is football. He eats it, he breathes it, he just doesn’t know what he will do without it and doesn’t plan to stop any time soon. When a severe injury takes him off of the active list he’s determined to get back as soon as possible. After surgery and a prescription from his doctor to take it easy with no exercise he decides to head home for Christmas to see his family. He doesn’t expect to stay long but life has a way of throwing obstacles in the way and he ends up staying longer than the thought. When he’s intrigued and attracted to Emma Hart he decides that maybe Deer Lick isn’t all that awful after all.
Emma Hart is ready to have her Happily Ever After. She wants to whole shootin match – the love of her life, the kids, the white picket fence – and no fast talking, arrogant football player who will leave Deer Lick in two shakes is going to get in the way. She’s mightily attracted to Dean even though she doesn’t like him or his “type” all that much but he keeps showing up and getting under her skin. How is she to find the man of her dreams when she’s got this guy hanging around? Dean eventually gets to Emma enough that they start an affair but Emma’s knows that it can’t last – even when Dean says it can.
Let me start with my likes:
I liked Dean – pertnear loved Dean. Sure he was cocky but he was thoughtful and he loved his family. I think he got a raw deal from Emma for most of the book and I felt so bad for him. He was just a good person who grew so much and I loved reading about him.
The parts where Dean’s dead mother comes back to talk to him were great. I just love Letty Silverthorne and the fact that she’s trying to get her children settled.
The premise of the story with Dean coming home and finding what he didn’t know he was looking for – that was really satisfying.
My dislike:
Emma – for a good part of the book. I’m frankly torn between liking this woman and not liking her. I realize that she wants the American dream with hubby and kids but I think she was downright mean to Dean for most of the book. She was burned in her past and I felt for what she went through but I didn’t think that her being as abrasive and abrupt with Dean as she was was called for. Yes, she wanted to turn him down in no uncertain terms but I felt it was a bit too callous at times. She did warm up eventually and when she did I liked her. I thought she was kind to her pet and to her grandmother and that made her better in my eyes.
This was a cute, fun contemporary in the end. It was both funny and sad and I like feeling all of those different emotions when I read. While I didn’t like this story quite as much as I liked the story in book 1, Second Chance at the Sugar Shack, it was still a good book.
Rating: 3.5 out of 5
Candis Terry
Avon Impulse