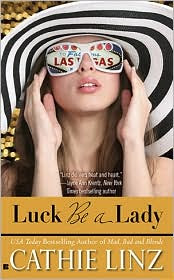 Rowena’s review of Luck be a Lady by Cathie Linz.

To be honest, I’ve been in a bit of a romance reading slump. Every time that I pick up a romance novel, something else will catch my attention and down the book would go. In the last couple of weeks, this is the only book that I’ve started and finished.

I liked this book. It was cute, fluffy and though there were some things that I felt weren’t explored enough in the book, I still enjoyed it. The story starts off at Megan’s cousin’s wedding in Las Vegas and during the ceremony, we meet the hero Logan as he tries to stop the wedding, thinking that his grandfather is marrying Megan’s grandmother. Logan wants to keep his grandfather from being arrested for bigamy and after everything has settled down, the story really begins.

While at the wedding reception, Megan overhears her uncle (the bride’s Dad) talking about her mother to her Dad. The mother that her father told her was dead turns out to be…not dead. Of course, Megan flips out and runs away. She runs right into Logan Doyle who is a sucker for a damsel in distress and he takes her out for some pancakes and then the adventure begins.

I really enjoyed getting to know both Megan and Logan. Megan was a do gooder with a heart of gold and Logan was a jaded stud of a man who was perfect for Megan. My favorite parts of this book were the parts where Megan and Logan are both front and center. The chemistry that everyone talked about at the wedding was felt by me and it leaped right off the pages. I enjoyed the romance that bloomed between the two of them and the way that they both fell in love with each other was just cute.

I was surprised at the end when the first of the two (Meg and Logan) confessed their love for the other. I totally thought it was going to be one person who said it first but I was wrong. I loved that I was wrong.

Overall, this book was cute. It was exactly what I needed to read at the time that I read it and it was just an enjoyable book that I’m glad that I read. I enjoyed the secondary storyline between Logan’s grandfather and Megan’s grandmother. Logan’s grandfather (who’s name is totally beyond me right now) is a hoot! He had me cracking up more than once throughout the book and I just loved him to death.

The whole deal with Megan’s mother took a backseat to everything else that was going on in the book that I didn’t really pay it too much attention but still, I enjoyed the book. So yeah, I recommend this book to lover of contemporary romance and to readers who want something light and fluffy to read.

One response to “Review: Luck be a Lady by Cathie Linz.”