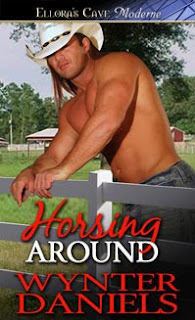 Tracy’s review of Horsing Around by Wynter Daniels

City girl Paige Eastman arrives at her recently deceased father’s Ocala, Florida, horse ranch to settle his estate, but she finds more than material assets with his business partner, resident cowboy Jake Skinner. The two engage in a hot fling until Paige learns she must sell the struggling enterprise out from under Jake.

All Jake wants is a chance to turn the business around since Paige’s father nearly ran it into the ground. But his attention quickly shifts to wrangling the hot prima donna who is now his partner. Can they overcome their differences without dousing the fire burning between them?

Paige heads to Florida from New York about 2 months after her father has died. She’s to deal with his property and business but she soon finds out it’s a bit more complicated than that. You see Jake who she meets on the ranch, is/was her father’s business partner. He wants to make the ranch work but Paige’s father ran it into the ground and it’s not making a profit. So should she listen to Jake or sell the property?

I have to tell you when Paige first showed up on the ranch and was interacting with Jake all I thought of was – what. a. bitch. Seriously. She had attitude in spades. Granted she was there to deal with her father’s estate and her father had walked out on her and her mother 15 years earlier so I can understand she’s doing something she doesn’t want to do, but come on! Really, you refuse to help Jake when all he asks for is for you to fill a bucket with water?

Luckily her disposition improved as the story went on. I have to say this was more a relationship that started with sex and moved on from there. We are taken too deeply into their thoughts but it does show them growing emotionally attached quickly after sex – which seemed to work.

I won’t tell you what happened – either with the ranch or with Jake and Paige – but I will say that it had a satisfying end. It was a quick, short read that was also very sexy in that wonderful cowboy way.