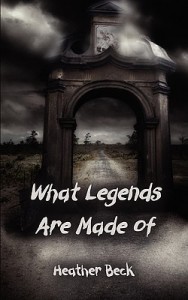 Travel to Sir Tristan’s Estate, a place where ghosts roam freely and enter into your dreams at night. Step aboard the Blue Oceana, a ship that will lead you to the world’s last merman. Get a ticket to Frank’s Freak Show to discover the truly disturbing main attraction. Finally, enter the doors of Karyn and Max Shield’s Costume and Magic Shop. It’s a place where you can buy merchandise that is out-of-this-world.

These tales will leave you spellbound and yearning for more. Are you ready to find out what real legends are made of?

This is a novella that is made up of 4 short stories.

The first story follows Skye, a photographer, who has been given the assignment of capturing the sadness behind the Sir Tristan estate in Virginia. Apparently Sir Tristan was a true humanitarian who lived for helping others. The estate is now owned by the state of Virginia and has a bed and breakfast in it. Skye has been assigned a historical who she finds out is Tom Dove. Once at the estate strange things start to happen to Skye. She finds herself hearing voices and when she investigates she finds she’s viewing occurrences from history. Things get stranger and stranger and Skye decides to flee the estate. But Tom isn’t who he says he is and he’s not about to let her go. Can Skye escape and when she does what will she escape to?

This was an interesting story…a little bizarre, but that goes for all the shorts in this novella.

The second story is about Mandy a girl who’s had a hard life and Ed who is very wealthy coming together. On a date they decide to take on his boat they are attacked by hammerhead sharks and Mandy is saved by none other than a merman. They get him on board the boat and he explains how mermen came to be. Unfortunately after the telling the merman, Blue Oceana, decides that Mandy is now going to be his woman and jumps overboard with her. Will Mandy now become a mermaid? Will Ed let Blue Oceana get away with his new love?

This was my favorite of the four stories…possibly because it had the most romance in it and I am a die hard romantic.

The third story leads us to the carnival where Brittany has a summer job. Brittany is only 20 but is running the educational tent. On her first day of training she meets Frank. Frank is older (36) but Brittany is drawn to Frank. After a week of working Brittany is almost attacked by her boss. Frank comes to the rescue and leads her to his tent to view his carnival attraction: Stanford’s Freaky Shriek’s Freak Show. And let me tell you it’s pretty freaky. Frank shows Brittany the fish who look perfectly normal but when she tells the fish her name, they spell it out. Then they’re off to see the real live unicorn. It seems that Frank has adopted these animals from the land of No name where mythical beings actually exist but that’s not all. Frank is immortal and now wants Brittany to be immortal with him. Can Brittany handle all of the freakiness that Frank is handing her? Will she accept Frank’s offer?

Although written well (as are all the stories) I wasn’t a huge fan of this short. I didn’t care for how things was set up with the boss attacking and felt it was unnecessary for the overall story.


The fourth story takes us to a couple who have always dreamed of owning their own costume and magic shop. They decide to finally do it and take the plunge. When they are cleaning and moving items around in the store before the Grand Opening they find a skeleton. They don’t think it’s read and put it in the front window. On the opening day they make a large sale to 2 teenager siblings who are starting their own magic show. But when they start the show for a kids party things start going terribly, horribly wrong. The sister runs back to the shop after her brother disappears, literally. The owners start to leave but they’re stopped in their tracks when the skeleton in the window comes to life and starts talking to them. It appears that the magic shop and all of its contents are cursed because the previous owner killed this man. Will the skeleton get to the previous owner and kill him? Will the new owners get out of owning a cursed shop? Will the brother reappear?

This was my least favorite story of the bunch – but I think it’s because I have children. When things started going horribly wrong with the magic show they were at a 5 year olds birthday party. The things that were happening would have freaked me out completely and no doubt would have given 5 year olds nightmares for years to come. Being a mom I just don’t dig stories (or movies for that matter) that involve children and horror, but again, that’s personal preference.

One response to “Guest Review: What Legends Are Made Of by Heather Beck”