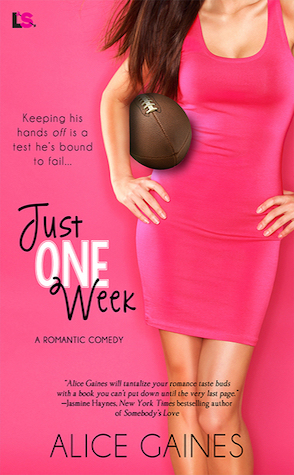 Her brother’s best friend is not only the hottest man Michelle Dennis has ever seen, he’s the reason she left town eight years ago. Of course he’s the one waiting at the airport. Worse, he made sure they’re staying in the same house.

Alex Stafford is expecting to pick up his friend’s kid sister, not a full-fledged bombshell. He was planning to apologize for their past, but the feelings he had years ago come roaring back…and this time, there’s no denying them.

Keeping his hands off is a test he’s bound to fail—especially when they’re stuck in close quarters. But falling in love with Michelle, living in her world, isn’t an option for a guy like him. And remembering that will save them both a lot of heartache…

I was really interested in reading this book after reading the synopsis. I’m a total fan of the brother’s best friend trope so I was pretty excited to get this one read. I’m sad to report that this book just didn’t work for me. At all.

Our heroine, Michelle returns to the place that always felt like home after being away for 8 years. She went away to college and then after college, she went to some more school and then she got a job working across the country so she hasn’t been home. Everyone knows that she ran away and that her brother’s best friend Alex Stafford is the reason.

Alex’s parents are celebrating their 35th wedding anniversary and his father’s birthday and Michelle is expected to attend the party. It’s a big deal for them and Michelle doesn’t have the heart to not be there. Alex’s parents were like parents to her and they loved and supported her when her own parents wouldn’t so out of respect for them, Michelle comes home. She was expecting to spend the entire trip home acting casual around Alex but things don’t always go the way you plan, especially when Alex shows up at the airport to pick you up and won’t let you hide from things you want to hide from.

Alex is determined to mend the relationship between him and Michelle. He won’t get a more perfect opportunity to do that so the time for fixing things is now.

Sadly, I never connected with anyone in this book. Not even any of the secondary characters. There was a lot of potential but the story never took off for me and the dialogue between the hero and the heroine didn’t feel right. It wasn’t authentic or real, at least that’s how I felt. I felt like I was reading what my grandma thinks guys in the NFL sound like. He thought and said things like, “What the f?” and “Holy cow” like he was a 12 year old juvenile and not a grown ass man in the NFL. He actually screamed the following:

“Damn it,” Alex shouted, “At least, leave me my dignity”

My reaction to that was:

The entire book felt off to me. I couldn’t get into the romance between Alex and Michelle because I thought they were immature and Alex was a whole lot of woe is me that just didn’t ring true for someone who is in the NFL. The NFL is not an easy profession to get into. My nephew is hoping to play in the NFL and he’s got a dominant personality. He’s driven, he’s persistent and he’s bullheaded but none of those characteristics struck me as true for Alex. His whole I’m not smart enough, I’m just a dumb jock attitude rubbed me the wrong way because you’re a grown ass man who grew up with a supportive family, supposedly thriving in a profession that only the top percentage of players in the entire country can even be a part of and I felt like he was more whiny baby than grown man.

Michelle wasn’t any better either. I get her grudge over what Alex did to her all those years ago but aside from that, she was pretty forgettable. I just finished the book and I can’t remember that much about her, other than she worked as a biometric researcher and had a doctorate. shrugs

Don’t even get me started on Kyle, the brother and best friend. His tantrum when he finds out about Alex and Michelle made me roll my eyes and want to bitch slap him into next week.

I just couldn’t with this book and I kept reading hoping that it would get better and that something would click for me but in the end, I was still frustrated and rolling my eyes so this book just wasn’t for me.

4 responses to “Review: Just One Week by Alice Gaines”