Today we’re helping support author Lauren Grimley in her bid to raise  awareness in support of The Breast Cancer Research Foundation and V-Day, two women’s charities. She’ll be splitting the proceeds from her new paranormal romance short story collection from the Alex Crocker series, Unbridled, between the two.

Unbridled: A collection of short stories from the Alex Crocker series 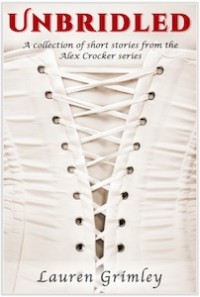 “Think Law and Order SUV meets The Breakfast Club” was Ellie’s trite explanation of what Alex had been dragged into. Add a few fangs, Fifty Shades of Oversharing, and a dash of Dr. Phil, and she was in for quite a Thursday night.

Alex couldn’t deny she had become the pint-sized poster child for PTSD lately, but she didn’t exactly expect to find a support group for teachers turned vampire chew toys in Bristol, MA. Listening to the tales of the four other females gathered to help her heal, however, she accepts that perhaps both the worst and the best of life can blossom from the unexpected.

Unbridled is a novella-length collection of four connected stories focusing on the unlikely friendships and less likely lovers of the female characters from the Alex Crocker series.

Even a female whose mating has been arranged most of her life still thinks about what she wants in a mate. Not one of the qualities Sarah had hoped for were easily evident in her betrothed, the future Regan of the Rectinatti coven. Perhaps, though, there were more layers to Darian than he liked to reveal, but how does a subject unmask a prince?

You can’t fall in love with someone you barely recall, but that, Vivian supposed, was the point. After a terse meeting with the Knower, a mind reader, memory manipulator, and the coven’s most notorious lecher, Vivian isn’t herself. She can’t shake the feeling that the solution to her mood lurks just below the surface of her consciousness. Only plunging into darkness, though, will bring everything to light.

The shared need for blood brought them together, but individual desires for secrecy are keeping them apart. Each already left behind a life of privilege for reasons the other likely couldn’t understand. Now both Rocky and Ellie need to decide if they’re willing to open up about their pasts in order to ensure a future.

Series: Alex Crocker series, can definitely be enjoyed without reading the first two books in the series, but is written to fit after the events of book 2, Unveiled.

Cancer and violence suck (and not at all in that sexy vampire way):

October is National Breast Cancer Awareness Month and National Domestic Violence Awareness Month, two issues close to my heart. As a daughter of a two-time breast cancer survivor and the teacher, friend, and aunt to so many beautiful and strong women who I never want to see suffer, I chose to use the release of Unbridled to help support two terrific charities that help women.

Romance for a Reason is enabling me to use my tales of strong heroines, fanged though they are, as a fundraiser for The Breast Cancer Research Foundation and V-Day. I’ll be donating the proceeds from the collection to these charities, and hopefully, through bringing these issues to readers’ attention, can also inspire others to reach out in their own ways. Women facing illness or abuse can feel like they’ve had not just their health, strength, and beauty suck from them, but also their essence, their spirit. It’s time we bite back and fight back—for me that fight started with a pen and some fangs. How will you help?

How you can bite back:

Read some romance. Proceeds from Unbridled will be donated to the two charities listed here.

Donate. Make your own individual donation to these two charities or choose a local charity supporting these and other causes affecting women in your area. To learn more about each charity and my reasons for choosing them, visit the Romance for a Reason page. Or click through to donate directly.

Party hard. Gather the women (and men!) of your book club or just a group of friends for a Romance for Reason party. Party ideas? Check out my blog for ideas on how to plan your gathering. Then download the Romance Reading Questionnaire and/or the Body Lingo Bingo for some fun party activities!

Share. Tweet, status update, review, or just chat with friends about the books, the tour, and the charities (mine or yours)!

Thanks for your help! Here’s an exclusive excerpt from “Rules and Recollections: Vivian & Sage’s Story.” See the calendar of posts on the Romance for a Reason page to find other excerpts and posts.

“Pardon me?” she gasped.

He chuckled. “The females who live here. If you’re not allowed male visitors, how do you all feed.”

“Oh. Well, most of us live with a sister or close friend with whom we exchange essence. Others, I suppose, meet partners elsewhere.”

He raised a brow. “You suppose? You told the Regan you’re thirty-seven. You mean to tell me—”

“I don’t mean to tell you anything, because it’s none of your business.” Vivian looked down and straightened her skirts to be sure she didn’t inadvertently tell him through her thoughts.

“A little hypocritical from someone who’s made it very clear that she’s kept tabs on my feeding habits, don’t you think?”

“The fact that the whole coven seems to know your poor feeding habits is not my fault.”

“No, clearly it’s mine. I guess I need to stop making public announcements at the club,” he sneered. His face held the same expression it had when he had agreed to her insults of bully and bastard. It hinted at something, something softer than the hard shell he exuded. She’d never been particularly curious, but his was a mystery she wanted to solve. Unlike him, though, she had no means of reading further into it. It was her frustration over this that left her mocking him.

“Do you expect me to feed you now? In exchange for your help? Is that why you’re sticking around?”

He didn’t find her funny. His fists clenched by his side.

“Thank you for confirming that you’re as arrogant and small-minded as the rest of them. You almost had me thinking otherwise.”

His words stung. His opinion ought not to have mattered, but it did. He was nearly out the door before she caught her breath enough to respond, anger trumping hurt.

“I didn’t realize you were so picky.”

Her back slammed against the far wall. Sage had torn across the room and had her pinned. His massive body pressed against her slight frame. She could feel his fangs brush against her neck.

“I didn’t realize you were so eager.”

“Some females like it rough, but you wouldn’t know, I suppose.”

She responded with a knee aimed at his groin. He shifted as soon as the thought crossed her mind and well before she made contact.

“That’s not fair!” She twisted to break free. “And without my permission, it’s also illegal.”

Sage scoffed. He dropped her hands from where he had them pinned.

“I’ve got my fangs practically in your artery, and you’re protesting the legality and fairness of my reading your thoughts? That’s a new one. And I assure you, there’s nothing fair about my so-called gift.”

“I know. You get to know everything about us, and we get to know nothing about you. And people hate you, or more accurately, fear you because of it. But did you ever consider that you’re partly to blame for that? You hide behind those lines.” She pointed to his brows. “You get pissed when someone feels sympathy for you and bitter when they don’t. You can’t have it both ways. That’s not fair, not to someone who’s trying to know the real you, and not to yourself.”

A grin played on his lips as he continued to listen to her thoughts. She had done it again. She averted her eyes, breaking the contact. Too late.

“If you’re done,” she said glaring up at him, “you can show yourself out.”

“You were serious about feeding me. Or at least seriously considering it. You’re crazier than I am, you know that?”

“Ugh.” Her tiny fists balled at her sides. She had just explained how she didn’t know anything about him, yet every time she turned around, he’d plucked something else from her head. She wanted to punch him, to scratch at his face, to throw him on the bed and suck an ounce of essence, of knowledge, from his veins. Blood pooled suddenly under the surface of her skin. She glanced up to see if he had somehow heard that thought too, despite the absence of eye contact or physical touch. She released her held breath when she saw he hadn’t.

Lauren is giving a Prize Pack away! 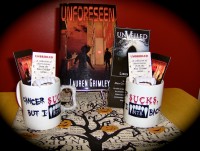 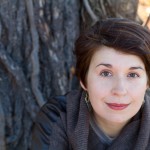 Lauren Grimley lives in central Massachusetts where she grew up, but her heart is on the beaches of Cape Cod where she spends as much of her time as possible. After graduating from Boston University she became a middle school English teacher. She now balances writing, reading, and correcting, all with a cat on her lap and a glass of red wine close by.

Unforeseen, the first novel in the Alex Crocker Seer series, was Lauren’s debut novel. She was thrilled this spring to continue the series with Unveiled and now Unbridled. To learn more about her or her writing or to connect with her online visit her website at www.laurengrimley.com

Unbridled is available from Grimm Sisters. You can buy it here or here in e-format.

One response to “Exclusive Excerpt (+ a Giveaway): Unbridled by Lauren Grimley – Romance for a Reason”