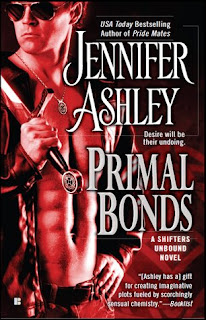 When half-Fae, half-Shifter Andrea Gray flees an abusive would-be mate, the only way she is allowed to relocate to the Austin Shiftertown is if a Shifter there claims her as mate.

Sean Morrissey, the Guardian of his clan and all of Shiftertown, is mateless, lonely, and has a tough job–to send the souls of deceased Shifters into the afterworld. He volunteers to claim her, sight unseen, but doesn’t realize that one look at the gray-eyed, dark-haired Andrea will stir the mating frenzy in him. Even though the mate-claim isn’t finalized, official, or yet blessed, Sean will do anything to get Andrea into his life and keep her there, forever.

Primal Bonds was probably the most refreshing paranormal romance I have read. It seemed so real in the aspects of how the human world would react to the knowledge of shape shifters and fae in the world.

Its the second book in a series, but most definitely holds up well as a stand alone book. There is just enough back story for the world and characters that you don’t need to read the first book. Although when I finished Primal Bonds I had to start Pride Mates (#1 in the series) right away.

Each character is very well written. I loved the quirky nuances that were in each character. The maturity level of the characters were refreshing as well. I loved that the adults acted and sounded like adults.