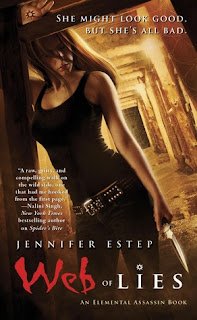 Judith‘s review of Web of Lies

by Jennifer Estep.
I’m Gin Blanco. You might know me as the Spider, the most feared assassin in the South. I’m retired now, but trouble still has a way of finding me. Like the other day when two punks tried to rob my popular barbecue joint, the Pork Pit. Then there was the barrage of gunfire on the restaurant. Only for one, those kill shots weren’t aimed at me. They were meant for Violet Fox. Ever since I agreed to help Violet and her grandfather protect their property from an evil coalmining tycoon, I’m beginning to wonder if I’m really retired.

So is Detective Donovan Caine. The only honest cop in Ashland, Tennessee is having a real hard time reconciling his atraction to me with his Boy Scout mentality. And I can barely keep my hands off his sexy body. What can I say? I’m a Stone elemental with a little Ice magic thrown in, but my heart isn’t made of solid rock. Luckily, I always get my man . . . dead or alive.

This is the second novel in Ms Estep’s Elemental Assassin series and continues the story of Gin Blanco, a woman who saw her family exterminated like bugs by a Fire elemental who hated Gin’s parents and whose rage is still directed at those she needs to eliminate in order to extend her power and influence. She does not realize that Gin is a daughter of that family she believes long dead, nor does she realize that Gin’s sister survived as well. Finding that sister is one of Gin’s life goals and for seventeen years, working as one of the South’s most lethal and feared paid assassins, Gin has sought justice where there was no justice while seeking that long lost sibling. Her retirement came about at the end of Book I when she found her mentor, a kind of surrogate father, dead in the restaurant she has inherited. She is tired of violence and is hoping to direct her efforts and talents toward finding her sister. But the needs and dire straits of Violet Fox and her grandfather come crashing into Gin’s everyday life in such a way that she is really unable to ignore their plight. Out come the knives and the old skills and planning genius, the ability to live and move in the shadows, again becoming her modus operandus.
I wasn’t sure that I would really like these novels when I agreed to read and review them. While I like some sci-fi/paranormal stuff, it isn’t my first love. But I was familiar with some of this author’s previous work and now I am very glad that I began these novels. I admit to not being able to put them down and this second novel was just as compelling as the first. I didn’t feel that it lost any of the edge or became redundant in any way. In fact, the tension between Gin and the good Detective Caine never let up until a very surprising resolution to their relationship. I remained fascinated by this character–a woman of deep compassion, strong emotion, unswerving loyalty to those who made up her little “family”, as strange as they were, and one who did what she did because the law enforcement community was riddled with corruption. Good people had no champions. Yet her assassin skills were mind-boggling–she took on some pretty scarey characters, and while she got her backside kicked and sustained some fairly profound injuries, she never seemed to lose her edge or her willingness to wade into the fray.
Another aspect of this novel that kept my interest is the very weirdness of her “family” members–her mentor’s son who, on the one hand was very self-serving and chased personal pleasure wholeheartedly, but who was loyal to a fault to Gin, dropping whatever or whomever he was “doing” in order to be available to her or to provide “backup.” The two sisters, one of whom worked for Gin at the Pork Pit, who were gifted elementals in their own right, and who healed and sustained her in many different situations. Perhaps they are a metaphor for many families–natural or contrived–which are really weird in so many ways, flawed and certainly dysfunctional, but who override the negatives as they are loyal to one another and who strive to keep faith with one another in a variety of life situations. I also found Gin’s character to be, at least for me, a metaphor for how all of us live with two sides to our persona: the kind and gentle, compassionate and caring on one side, and the relentless and sometimes cruel insistence on our values (whether they be good or bad) on the other. And then there is Detective Caine, the honest cop who, on the surface, seems to be the one light in the darkness of corruption. Yet I found him to be disappointing, in the same way I am disappointed in all really good people who depart from their good side when they become intolerant or unable to see the positive in someone else, even when they are disapproving of them. No matter how strong his attraction to Gin, he doesn’t seem able to resolve the inner strife. What kind of love is this? The answer may surprise the reader.
So I have to say that reading Web of Lies was a great experience for me, one that surprised me but which I am delighted not to have missed. It has humor and lots of delightful dialogue that keeps the spice and linguistsic interest high. It has a sexual edge between Gin and Caine. It has mystery and suspense, paranormal and fantasy, and it pulls the reader from page to page with an insistence that surprised me. All this is the mark of a very, very good writer and a very good book. I think this is one book you don’t want to miss.

This book is available from Pocket. You can buy it here.

One response to “Guest Review: Web of Lies by Jennifer Estep”