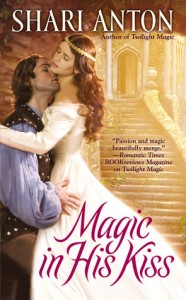 By order of King Stephen, Nicole de Leon has been confined to Bledloe Abbey since her father’s death eight years ago. As an orphaned noblewoman, she has always known that she would be married off to strengthen King Stephen’s political position. But as she reached marriageable age, she never dreamt that her extended family would come to her aid and prevent this unwanted marriage. For Nicole’s uncle, Connorap Maelgwn, has always despised King Stephen and would do anything to thwart him…even commit an act of war by kidnapping the bride the King needs to solidify an alliance. But Connor can’t charge through England with an army. He needs a warrior who’s trustworthy…a warrior like Rhodri ap Dafydd.

Rhodri ap Dafydd, a bard and warrior, has one purpose: to bring Nicole de Leon and home to Wales. He has no interest at all in politics–he’s merely helping a friend. But from the moment he lays eyes on Nicole, friendship is the last thing on his mind. With her fiery nature and her sharp tongue, Nicole is unlike any woman he has ever met. But falling in love with her was never an option. Brought together by fate but soon torn apart by war, can these two star-crossed lovers find a future together?

On the journey from the abbey, which is fraught with danger, Nicole and Rhodri find themselves learning about each other and liking what they find. They fall in love, but of course do not tell the other. Rhodri knows that she is bound to marry a prince of Wales and knows he should not interfere.

On top of all that happens on the journey Rhodri discovers that Nicole can hear dead spirits who have not moved on to the next world. I have to say that when I saw the word magic in the title I didn’t now they meant literally. However, I think the addition to the story was done well and added a nice element.

This was a typical historical romance (well, with magic involved) but a very sweet story. I loved the simple romance involved and would recommend it to anyone who loves historicals.