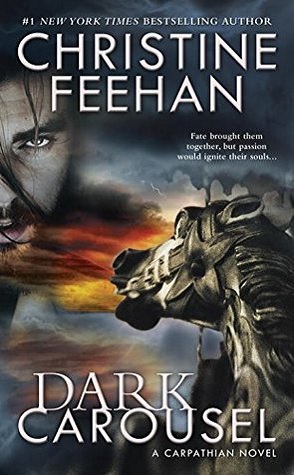 The moment Charlotte Vintage walks into his club, Tariq Asenguard's blood is set on fire. The ancient Carpathian had given up hope of finding his lifemate, but now he will do anything to make Charlotte his own. What Tariq doesn't know is that Charlotte is using herself and her best friend as bait-to try to draw out the bloodthirsty killers who have already murdered Charlotte's brother and mentor.
Charlotte is familiar with Tariq. Not only is he one of the richest and most eligible bachelors in the city, but he's also a renowned collector of old carousel horses, which Charlotte restores. Their shared passion opens Charlotte up to trusting him with her life and with the desire she can no longer control. But it also makes her vulnerable to a centuries-old curse that will unite her and Tariq in a war against the enemies of humans and Carpathians alike..

I haven’t enjoyed a book in this series as much as I enjoyed this one in quite some time. It was a combination of things. Tariq, while a throwback to ancient Carpathians, wanted Charlotte as a partner, not just a woman to put on a shelf that he takes down to have sex with. He respected and listened to her opinions. He was just generally a good guy that cared deeply for Charlotte and didn’t discount anything she said. It was amazing when I thought about the last book, Dark Promises.

Tariq owns various nightclubs throughout the United States. His sole purpose for owning them is to find his lifemate. I didn’t really understand that because what are the odds that one woman would 1) live in the United States and 2) go to nightclubs? I guess in this case, they were quite good because Charlotte shows up in his San Diego nightclub and he happens to find her while he’s actually there instead of in one of his other clubs. Very convenient that.

Charlotte and her friend Genevieve left their home in France when their friends and relatives started getting murdered. First it was Genevieve’s grandmother and boyfriend. Then it was Charlotte’s mentor. Finally Charlotte’s brother in the United States. It was her brother’s daughter, Charlotte’s niece that forced her to leave France and come back to San Diego. Charlotte and Genevieve knew they were followed all the way from France. They both know it has something to do with a psychic testing center that they went into as a lark. They thought it would be fun to test abilities that they knew they both have. Charlotte is able to touch an object and see into the past. It’s one of the reasons she loves working with old carousels.

When they find the men that have been following them, it is in Tariq’s club. They come up with a plan to follow them, but Tariq knows that they’re in more danger than they even realize. Somehow they’ve attracted the noticed of some very powerful vampires. Tariq brings them to his estate where they’ll be safe and shows Charlotte what being part of his world will be like.

The one thing I did find odd was that Charlotte was so accepting of becoming Carpathian. Most of the women that are converted are disgusted by the thought of taking blood, but Charlotte accepted it from the very beginning. I don’t know if that is normal or not. Other than that, this is the best Dark book in a long, long time.