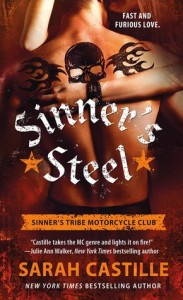 HE'S HELL ON WHEELS.
Tall, dark, and dangerously handsome, Zane "Tracker" Colter is the strong, silent type of tattooed muscle biker who drives women wild. But as a master of strategy for the outlaw MC club, Sinner's Tribe, he doesn't have time to play around with groupies and biker chicks-especially when he can't stop thinking about Evie, the girl who got away...

SHE'S PLAYING WITH FIRE.
Evie's been in love with Zane ever since they were children-until he broke her heart and disappeared. Now he's back in her life, bigger and badder than ever. Zane is stunned by how beautiful and confident Evie's become, using her artistic talent to customize motorcycles. He wants her so bad, he'd ride through fire to win her back. There's one problem: Evie is dating his deadliest rival-the leader of the Black Jacks-and if Evie and Zane hook up, there'll be hell to pay...

Evie, Zane and Jagger were best friends growing up but Evie and Zane had a special connection. They took that connection to an intimate level one night when Evie was just 17. Her father, the Sheriff, found them and Zane ending up leaving town that night as he was then accused of murdering her father.

It’s been 9 years since that occurred and now Zane is VP in the Sinner’s Tribe MC and Evie is working as an artist who paints motorcycles. When Zane finds out she’s living in the same town as he is he doesn’t think he wants anything to do with her as he still feels, after all this time, that he’s not good enough for her, but he can’t seem to stay away. When Evie introduces him to his 8 year old son that seals the deal that she is HIS. The problem is that Evie has been dating the President of the Black Jacks MC and Viper’s not about to let Evie go quite that easily.

I really liked the first two books in this series but this one just didn’t work as well for me. I really love friends to lovers stories and reunion stories so this one had two chances to grab me and it just didn’t.

Evie and Zane, to me, didn’t have the kind of chemistry they needed to get this off the ground. It was supposed to be this great love but all I heard was Zane’s thoughts on how he wasn’t good enough and Evie’s thoughts about how she couldn’t trust him. These are valid points, don’t get me wrong, but when they are mentioned over and over it gets old really fast.

The books slowed down for me in the middle and nothing seemed to be moving forward. Zane and Evie kept doing the same things over and over and not getting different results. Duh. When it finally did move forward I didn’t care for Zane’s actions. I knew he loved Evie and did what he did for her but with her thinking he was gonna leave her all the time and then him telling her won’t but then doing it anyway made no sense to me. Also, because of the lack of chemistry I couldn’t get into the love scenes and skimmed almost every one. I just wasn’t feeling it and that made me sad.