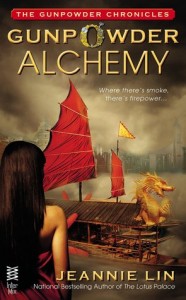 In 1842, the gunpowder might of China’s Qing Dynasty fell to Britain’s steam engines. Furious, the Emperor ordered the death of his engineers—and killed China’s best chance of fighting back…

Since her father’s execution eight years ago, Jin Soling kept her family from falling into poverty. But her meager savings are running out, leaving her with no choice but to sell the last of her father’s possessions—her last memento of him.

Only, while attempting to find a buyer, Soling is caught and brought before the Crown Prince. Unlike his father, the Emperor, the Prince knows that the only chance of expelling the English invaders is to once again unite China’s cleverest minds to create fantastic weapons. He also realizes that Soling is the one person who could convince her father’s former allies—many who have turned rebel—to once again work for the Empire. He promises to restore her family name if she’ll help him in his cause.

But after the betrayal of her family all those years ago, Soling is unsure if she can trust anyone in the Forbidden City—even if her heart is longing to believe in the engineer with a hidden past who was once meant to be her husband…

When I heard Lin had written an adventure set in an alternate history Chinese steampunk universe, my first thought was “OMG I’m in!” Luckily, Gunpowder Alchemy didn’t disappoint.

Jin Soling is struggling to support her family after her engineer father was executed by the Emperor. Desperate, she heads to the city to try and sell her last valuable from her father, but she ends up getting detained by the Emperor’s son. The Prince understands his father’s arrogance is preventing the Empire from effectively fighting the Westerners, and he wants to create the kind of technologies that would allow them to level the playing field. He demands Soling’s help to find one of her father’s old colleagues, a man that holds the key to a crucial invention. For her part, Soling doesn’t trust anyone from the Empire or frankly want anything to do with their struggles, but she does want to clear her family name and get some security for her mom, brother, and faithful servant, so she eventually agrees to help. Soling has to track down the needed information and then get back to her family, who are in danger because of a growing rebellion against the Empire.

There were a few things I wasn’t fond of in this book, but overall it worked for me. I loved the setting. I am always looking for books, especially quasi-historicals, set outside Europe and America. The book weaves genuine historical details and fantastical reimaginings in a way that’s engaging. Obvious care was taken to make things accurate while still creative, and the setting was a big part of what kept me reading. Lin’s writing is evocative, and Soling’s voice comes through strongly. (The book is told from Soling’s point of view.)

Plus, the plot is fascinating! Everyone Soling meets has differing, and sometimes conflicting, agendas. There are the rebels fighting against the Empire, often in a ruthless fashion. There are the Emperor’s people, who believe that he is a god and the Empire is infallible. There are those allied with the Crown Prince who support the Empire but believe that the Emperor is making a mistake. There are the British and their native allies who are occupying part of the Empire and focused on making money. And finally there are others who aren’t particularly allied with anyone other than themselves and just want to be left alone. In this book, Soling is trying to decide what side, if any, she should be on. Who is “right” here, and does it even matter? By extension, as readers we don’t know who to support either. Is the Empire tyrannical and evil, or a force for the preservation of (alternate history) China? Are the rebels violent and selfish, or is their cause just? Are the British the villains? I personally wasn’t left with any clear preference. I loved that Soling is really on her family’s side. She does what she does for the people she loves, not for any larger cause. I don’t really know whether Soling will choose a side more definitively in the next book, but I for one appreciated her ambiguity in this one.

Romance fans are probably wondering if there is a romance here. The answer is, yes, while not the driving conflict, there is a quiet love story here. At the start, it seems like there will be a bit of a love triangle, but it’s such a non-conflict that I had to stop for a second to wonder if I was reading something that wasn’t there. It’s certainly more subtle than love triangles we usually see. I had heard before I read the book that the romance was very G-rated and not a major part of the plot, so I knew what I was getting into. And yet…I found myself longing for more passion and focus on the relationship. Soling and the hero would be sharing a quiet moment, and I would think “Ah, perfect time for some sex!” They never share more than a kiss, and even that I felt was born more out of a dangerous moment they were facing and less from some sort of enduring passion. Despite my penchant for trying to insert (harhar) sex where none exists, though, I actually thought more focus on their romantic relationship would have enhanced Soling’s own story. We know most of her choices in the book are made for those she loves. I wanted to see how passion for a partner would impact her decisions. Then again, I’m a romance fan. It wasn’t anything that ruined my enjoyment of the story–it just made me consider alternate possibilities.

While I liked the story, it wasn’t perfect. Soling doesn’t have a ton of agency in this book. It’s not really her fault because she’s in a pretty powerless position in society, but it also made the story a little less satisfying. (This is only book 1, though. Hopefully Soling can reclaim some agency in the future.) I actually wasn’t in love with the hero, either. I didn’t dislike him, but I did prefer the other angle in that potential love triangle more. (I wish I could lay out my reasoning better for the triangle and why I liked the guy I did, but to do so would spoil things.) I felt like the steampunk elements could have been better explored. Perhaps technology will play a bigger role in the next book, but in this book I felt like the technology was important to the characters mostly off screen. I wanted to actually see more of it. I also felt like some portions of the book dragged a bit, such as part of the time Soling spends on the ship in the first section of the book.

Truly, I want everyone who is even remotely interested in this genre/setting/plot to give Gunpowder Alchemy a try. Don’t expect a true romance, but do expect a complex story with a remarkable setting and fresh perspective (with a little side dish of gentle romance). It is something different and fun, and I want to see more of this kind of book.

This book is available from InterMix. You can purchase it here or here in e-format.  This book was provided by the publisher in exchange for an honest review.