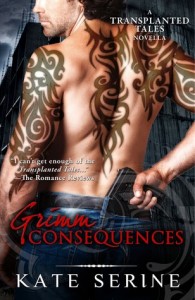 Saying Nate Grimm has a dark past is an understatement. Fortunately, no one's bothered to look too closely at the Fairytale Management Authority's lead detective and part-time Reaper. And that's the way Nate wants to keep it. For after centuries of torment and loneliness, he's finally found happiness with the hot and hard-charging love of his life, Tess "Red" Little.

Of course, his love for Tess is the reason there's a posse of Reaper judges after him, led by a sadistic bastard acquainted with Nate from once upon a time. Now, Tess will pay the price for Nate's transgressions unless Nate severs his ties to the transplanted Tales--and Tess--forever. His enemy has the advantage in speed, malice and brutality. But the Reapers have underestimated the depth of Nate's love and devotion. And the fury of his wrath. . .

Nate doesn’t exactly like to follow the rules that are laid down to him as a Reaper – especially the one that tells him to take Tess Little’s soul. He gives her a reprieve instead and saves her life. He watches over her, falls in love with her, and eventually he becomes her lover. . Nate, however, hasn’t exactly been completely upfront about who he is and his past. Unfortunately that is catching up with him. Right when he’s about to spill the beans about everything his past comes rushing up and he has to try and save Tess from death and then find out if she loves him enough to keep him around now that she knows what he really is.

I really like the Transplanted Tale series. I have to admit that I started at book 2 so never actually read Tess and Nate’s story – now that I’ve read this one I’m kind of glad. It’s given me insight into both Tess and Nate and I’m more anxious to read Red.

I really liked Tess and Nate in the 2 novels I’ve read in this series so it was great to get a little bit more insight into their relationship. I have to say that Nate is one hot, sexy man. He’s even sexier because he loves Tess so much and that just flips my switch. What he would do for her to save her life is amazing and I definitely wanted their relationship to come out on top. Red/Tess is a pretty kickass heroine and I thought she was the perfect match for Nate. Together they make an amazing team.

This was a great novella and a wonderful addition to series. If you’re a fan of the series you won’t want to miss this one. Oh and we also get an excerpt from the next novel, Ever After, that has Gideon in it – yay! Love Gideon. 🙂