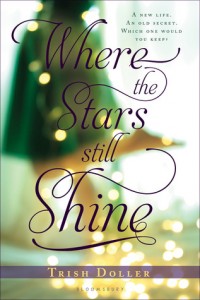 Rowena’s review of Where the Stars Still Shine by Trish Doller.

Stolen as a child from her large and loving family, and on the run with her mom for more than ten years, Callie has only the barest idea of what normal life might be like. She’s never had a home, never gone to school, and has gotten most of her meals from laundromat vending machines. Her dreams are haunted by memories she’d like to forget completely. But when Callie’s mom is finally arrested for kidnapping her, and Callie’s real dad whisks her back to what would have been her life, in a small town in Florida, Callie must find a way to leave the past behind. She must learn to be part of a family. And she must believe that love–even with someone who seems an improbable choice–is more than just a possibility.

Trish Doller writes incredibly real teens, and this searing story of love, betrayal, and how not to lose your mind will resonate with readers who want their stories gritty and utterly true.

Callie was kidnapped as a young child by her mother and has lived the last 12 years, on the run. Her life wasn’t easy but it was the only life that Callie knew. She learned a lot of life lessons long before she should have learned them and when they’re caught, her mother heads to jail and she heads to live with…her father. She hasn’t seen her father in years and he’s a complete stranger to her now.

He’s got a new life now. A new family and one of the first things that he tries to get Callie to understand is that his new family is her new family too. Just because they haven’t seen each other in twelve years does not mean that he forgot about her or grieved her loss the entire time that she was gone. It’s one of the main themes in the book, trying to get Callie to realize that she doesn’t need to run anymore. She can plant the roots that she’s been craving for a while and she’s safe. Finally safe.

Her new life comes with a great huge Greek family and right from the jump, Callie is overwhelmed.

She’s overwhelmed with a whole bunch of things but when Alex Kostas comes into her life, she’s attracted and very, very interested. Too bad, her new best friend and cousin, Kat has warned her off of him. But you can’t run from life and Alex doesn’t go anywhere…and neither does Callie.

This book follows Callie as she tries to make sense of her new life with her father without holding on to the guilt that comes with being happy without her Mom. She feels like she’s betraying her mother for liking her new life. For liking the stability, the love from her father and family and for having a home to rest her heat at every single night. She can be free from her old worries and scares and though it’s everything she’s always wanted, she struggles with everything.

For a bit, I was frustrated with how much Callie didn’t trust her father. He’s shown her nothing but kindness and love and she stays completely loyal to her mother. Her mother who kidnapped her away from her family and didn’t protect her from things she should have protected her from. It was understandable, all of the trust issues but after a while, it grew frustrating. I wanted to smack some sense into her but alls well that ends well.

Her relationship with Alex was a bit hard to take at first too. She was 17 and he was 22. That’s a bit of an age gap but as the story continued, they made more sense together than they did apart. There were feelings there and a blossoming love that Callie needed. Alex kept her grounded and gave her peace and I wanted that for her. Alex was a cutie patootie too so it wasn’t hard for him to win me over.

Seeing Callie come into her own and make some tough decisions made for an interesting read, even if it came with its fair share of frustrations. It all ended the way that it was supposed to and when I closed the book, I was happy with the story as a whole so really, I can’t complain.

This book is available from Bloomsbury USA. You can purchase it here or here in e-format. This book was provided by the publisher in exchange for an honest review.