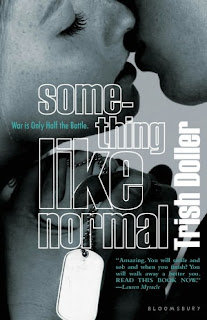 Rowena’s review of Something Like Normal by Trish Doller.

When Travis returns home from a stint in Afghanistan, his parents are splitting up, his brother’s stolen his girlfriend and his car, and he’s haunted by nightmares of his best friend’s death. It’s not until Travis runs into Harper, a girl he’s had a rocky relationship with since middle school, that life actually starts looking up. And as he and Harper see more of each other, he begins to pick his way through the minefield of family problems and post-traumatic stress to the possibility of a life that might resemble normal again. Travis’s dry sense of humor, and incredible sense of honor, make him an irresistible and eminently lovable hero.

I adore military guys and so I knew that I was going to like Travis but I wasn’t prepared for how much I was going to like him. Travis is in the Marines and has just returned from a stint in Afghanistan where his best friend Charlie was killed. He comes home (on leave) to find that his brother has taken over his car and his girlfriend. His parents are not getting along (on the verge of divorce) and he’s struggling with nightmares from Charlie’s death. He doesn’t fit in with his old friends (though it looks like his brother does) anymore and he’s not very happy.

Then he comes across Harper, a girl from school who’s reputation he had a hand in ruining. Harper isn’t happy to see him and gives him a black eye to prove it but with a month to kill before he can go back to work, he finds himself drawn to Harper. He’s not the same guy that he was a year ago and the only person that gives him any kind of peace is Harper. As they begin to get closer and closer, Travis is able to find peace from himself, from his thoughts and just everything around him for just a little while. So of course, he wants to be around her even more.

It wasn’t hard to understand why Travis was so drawn to Harper. She was an all around good person with a huge heart who was patient with him. His nightmares, his memories and his grief were hard to be around but she didn’t go anywhere. He needed her and she stuck around because she was just as drawn to him as he was to her. I really enjoyed getting to know Harper. I wanted her to be my best friend because I could just tell that she would be a great one. She had a great personality, a forgiving nature and she was pretty awesome.

Travis was a total mess when we first meet him and he continued to be a complete mess throughout the book but when the book ended, I knew that he was going to be okay. He became so much more than just a character in a book to me and I really appreciated Doller’s efforts in writing his character. He was a real, three dimensional character that leaped right off the pages and I ate each thought, action and scene with him in up. I came to love his character over the course of this story and I was so bummed when the book ended.

In my head, I could see Travis as Zac Efron from The Lucky One. Tortured by memories from his past and quiet, mysterious. He was a solid guy with a good heart who did stupid things from time to time. He wasn’t perfect but I didn’t care, I loved the heck out of him anyway. I was glad when he finally let go of Paige for good and I loved seeing him forge a bond with his Mom. He was good to her and I loved that he wanted to protect her from her relationship with his father and I just really enjoyed seeing things come together for him.

3 responses to “Review: Something Like Normal by Trish Doller.”