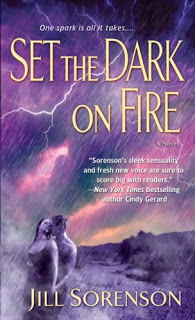 In a southern California town ablaze with sordid secrets, a free-spirited biologist and a straitlaced sheriff join forces to investigate a suspicious killing—and find themselves getting a little too close to the flames…

Shay Phillips knows her way around Dark Canyon. She’s handy with a gun and can track a wild animal with the best of them. It’s humans who usually give her the most trouble. And with a hormonally charged teenage brother to raise—and an admitted weakness for the wrong kind of man—they’re giving her plenty of trouble these days. Then there’s the matter of murder. As an expert on mountain lions, Shay is skeptical when a local prostitute turns up mauled without a drop of blood near the body.

Just a few days after Luke Meza is in Tenaja Falls he’s looking at a woman who’s been mauled by a mountain lion. So much for the nice respite he was looking for after living in Las Vegas. Even more disturbing is how attracted he is to Shay Phillips, the local woman that the Dept. of Fish and Game, has charged with the duty of discovering if indeed this was a mountain lion.

When Shay first meets Luke she is terribly hung over from a night out on the town. She’s certainly not at her best and the last think she needs is for a good looking new sherrif to see her like that. They certainly don’t get off on the wrong foot but they can’t fight their attraction.

I have to say that I wasn’t expecting to like Luke and Shay together as much as I did. They kind of seemed like they were just opposites…completely. I know opposites attract but I wasn’t quite sure I could see the two of them together when the book first started. Eventually we got to see under the many layers that they two of them were hiding under and Ms. Sorenson showed me how good they could be. I very much liked how the two were still very independent but also together. I like seeing a couple but I also love seeing that they don’t become too dependent on that other person.

There was also a secondary story going on here and that was with Shay’s 17 year old brother and what was going on in his life. He was brilliant but acting out constantly and seeing things from his point of view was interesting. Jill seems to write good YA stuff – at least she has in her last two books.

The only issue that I had was how fast the timeline was. Or maybe it wasn’t the timeline – since it was only about 4 days but more that Luke was so set on getting the hell out of dodge and then suddenly decided he was in love and wanted to stay. This was explained as a defining moment when things just started to gel in his life and in his head and I get that. I do believe it could happen but I just wasn’t completely sold on it. It certainly didn’t diminish the enjoyment of the book, however, so it wasn’t a huge issue.

Overall – a good book that kept me wanting to read more. A romantic suspense story with lots of great lovin.

7 responses to “Review: Set the Dark on Fire by Jill Sorenson”