Hey there, all! Not much going on in the life and times of Tracy this week. That’s a good thing. No drama mamma! Just the way I like it!

So on to what I read: 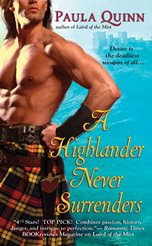 First up was A Highlander Never Surrenders by Paula Quinn . As much as I’ve liked all of her books I think the last two she’s done have been my fav (the other one being Laird of the Mist). This was great. I really liked Graham and Claire together and loved how the whole story panned out. Good read.

Next up was Loving Lies by Lora Leigh. This one was ok. Sla 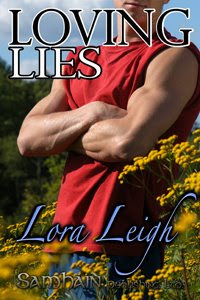 de has loved Jessie forever but he is taken away from her by his secret job. She has suffered for 5 years and now he’s back to claim her. Slade was an ok guy but there were a few things about him that bugged me…as well as a few that bugged me about Jessie. I actually ended up being more interested in one of the secondary characters but apparently his book hasn’t been written yet. I’ll just have to wait and see if it ever is! 🙂

His Son’s Teacher by Kay Stockham was next. The review for this book is below a couple of posts. Sweet book. 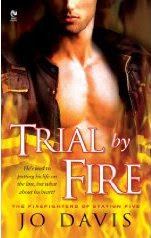 Fire by Jo Davis was a good book. I liked the story and will be very interested to read about the rest of Station Five and their lives. Of course this was the book that had the heroine going down on the hero without washing first (see below post) so I’m hoping that doesn’t happen in subsequent books. lol

Mercury’s War by Lora Leigh. I know there are quite a few out there that don’t like this series for whatever reason…I’m not one of th 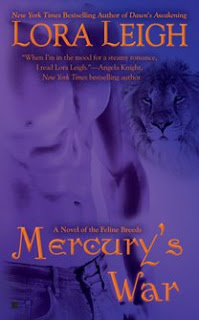 em. I love the Breeds! :0) This book was more similar IMO to the ebooks in the Breed series – before they started in print. I wasn’t thrilled with the series when it went to print just because I thought the writing lost something. I thought it came back slightly in Dawn’s Awakening but with Mercury’s War it came back full force. Those who enjoy the Breed’s will really like MW.

Last on for the week was The Cat by Jean Johnson. I have such mixed feelings about this series but yet, I keep reading them. I think it’s like I just need to kn 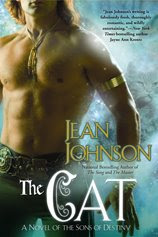 ow what happens but I’m not a huge fan of the writing. Ms. Johnson writes well she’s just incredibly descriptive and sometimes it just gets to be too much for me. Describing is fine – describing for 2 to 3 pages…not ok for me. But, as I said, I just keep reading them. I guess I figure this was the 5th brother and there’s only 3 more to go and then I can stop the insanity! lol Despite these mixed feelings though it was a good book – I’d still give it 3.5 stars.

10 responses to “What I’ve Been Reading This Week”